Year on year rise in student applications repeated for 2014

Applications to study at Queen Mary University of London are up almost 14 per cent this year, according to the latest statistics released by Ucas. 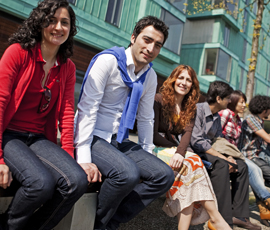 While UK undergraduate applications to Queen Mary are up almost 15 per cent since last year, there has also been an increase in interest from international students, by almost 6 per cent for EU applicants and almost 13 per cent for those outside the EU.

The latest Ucas data shows that London’s other major universities have also seen a rise of some 5 per cent since last year, as students recognise the benefits and opportunities created by living and studying in the capital.

Ucas has reported that, despite the pressures created by changes to the fees and funding system, young people across the UK are more likely to enter higher education than at any time before, with acceptance figures rising by more than 6 per cent since this point last year.

In 2012, Queen Mary joined the Russell Group of 24 leading UK universities committed to maintaining the very best research, an outstanding teaching and learning experience, excellent graduate employability and unrivalled links with business and the public sector.

With a 2,000-bed award-winning student village at its Mile End campus, Queen Mary is the only London university able to offer a completely integrated residential campus. More than £250m has been invested in new facilities in the past 15 years and the National Student Survey regularly ranks student satisfaction at Queen Mary as well above the national average and amongst the highest in London.

Queen Mary has seen applications increase by more than 29 per cent between 2011-2013.

Applications to Queen Mary will be open well into the New Year.