Economics, Law, Drama and Dentistry at Queen Mary University of London are among the subjects ranked in the UK Top 10, according to The Sunday Times Good University Guide 2014. 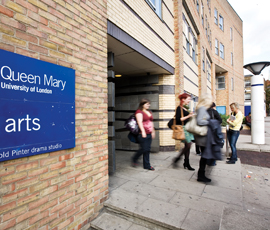 The league table, published on Sunday 22 September, lists Queen Mary as third in London for student satisfaction, with a rating of more than 81 per cent.

Queen Mary is 9th in the UK for its average staff to student ratio of 12 students per staff member, and ranked 25th for the quality of its research. The university has retained its overall Top 40 place, rising to 37th in the UK.

In the Guide’s subject rankings, Drama at Queen Mary is placed third out of more than 90 institutions offering the course, with a satisfaction rating of more than 88 per cent and an overall score of 96/100.

Dentistry also appears in third place, with a satisfaction rating of 91 per cent and a total score of 95/100. Barts and The London School of Medicine and Dentistry (part of Queen Mary) is rated seventh in the UK and third in London for medicine.

Several other subjects are given Top 10 rankings, with Economics in sixth place and Accounting and Finance at number eight. Law is also ranked eighth in the country out of 95 institutions offering the course. Materials is listed in 10th position, while English, History and Geography at Queen Mary all appear within the top 20.