A leading Egyptologist joins one of the stars of BAFTA winning documentary Mummifying Alan at Barts Pathology Museum on Friday 8 March, to delve into the preservation methods of ancient cultures and the bizarre tradition of Victorian mummy unwrapping parties. 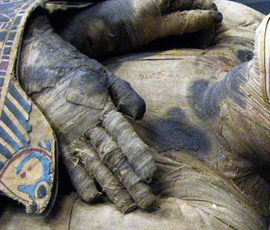 Peter Vanezis OBE, Professor in Forensic Medical Sciences at Queen Mary, will then lecture on his work for the BAFTA-winning documentary Mummifying Alan: Egypt’s Last Secret, in which he played an integral part in the first mummification of a body for three millennia.

Professor Vanezis will explain his role in the making of the programme, which saw a team of scientists work to preserve the body of Alan Billis, a taxi driver from Devon who was diagnosed with terminal lung cancer and donated his body to the mummification project before he died.

Egyptologist Joyce Filer is former Curator for Human and Animal Remains in the Ancient Egyptian and Sudanese department of the British Museum. Over ten years at the Museum, she was involved with the CT and X-ray scanning of mummies excavated in Egypt and Sudan, examined skeletons and wrote many books and articles on the subject. She is an expert in the gruesome illnesses and strange ‘cures’ used in Ancient Egypt.

Tickets to the event, which is sponsored by Hendrick’s Gin, are £6 and include drinks and the chance to view some of the Museum’s medical specimens.