A Queen Mary University of London student has received a scholarship from the Lord Mayor of London, under a pioneering programme aimed at helping students through university in the capital. 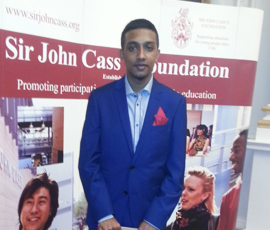 Tower Hamlets resident Tahmid Ahmed, 18, is in the first year of a BSc in Computer Science with Multimedia at Queen Mary’s School of Electronic Engineering and Computer Science.

He will receive a yearly scholarship of £3,000 through the Sir John Cass’s Foundation Lord Mayor’s Scholarship Programme. Grants can be used to meet the cost of tuition, maintenance or other educational costs, and will cover three years of study.

Commenting on his award, Tahmid said: “I am grateful for the scholarship as I found out only 13 students were selected out of just a few universities and I was one of those students. Now I’ve received this scholarship I will try my hardest in achieving the grades that I know I can get.

“Hopefully when I graduate I can get an internship in a major programming company such as Google. Although, by that time some new company may have surpassed Google!”

The programme is open to undergraduates aged 18-20 who must be permanent residents of one of nine inner London boroughs, including Tower Hamlets, Hackney, Newham and Lambeth. Applicants are put forward by their universities, then chosen by a panel of representatives from Sir John Cass’s Foundation and the Office of the Lord Mayor.

A ceremony was held on Wednesday 6 November at Mansion House, hosted by the Rt Hon. Lord Mayor of the City of London, Alderman Roger Gifford and Kevin Everett, Treasurer and Chairman of Sir John Cass’s Foundation.

Most students receiving awards this year are studying music or related degrees, with participants coming from institutions including the Royal College of Music, Trinity Laban Conservatoire and the Guildhall School of Music and Drama.

Tahmid is the 18th Queen Mary student to receive a Sir John Cass’s Foundation Lord Mayor’s Scholarship since the programme began in the 2011/12 academic year.