The original 1936 Rutt organ of the People’s Palace at Queen Mary, University of London, will pipe up once more on Thursday 7 February, following a renovation. 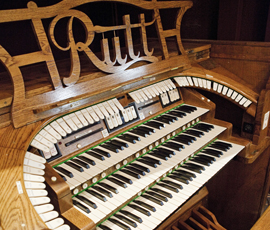 An organ recital in the Great Hall is part of a series of events throughout February and March that celebrate the reopening the People’s Palace at Mile End, after a £6.3m refurbishment to restore the building and install new audio-visual technology.

The superb Spurden-Rutt organ is the original People’s Palace instrument, installed in 1936 when the building was rebuilt following a fire. It is described as “one of the best of its kind” by Alan Wilson, accomplished organist and Director of Music at Queen Mary since 1976. Organist and composer William Lloyd-Webber has called it “a first rate recital-organ”.

After remaining untouched for over seven decades, the organ was successfully restored in 2012 by the Village Workshop’s organ-builder David Stalley and Organ Consultant John Norman, who considers the instrument to be “Robert Spurden-Rutt’s magnum opus”.

Alan Wilson will showcase the organ’s versatility with contrasting music, from Handel to Purcell, Alfred Hollins – who was the first organist of the original People’s Palace – to Eric Coates. Both Wilson and Donald Preece, Emeritus Professor at Queen Mary, have composed pieces for the performance.

"The programme aims to portray the more popular and secular side of organ music,” says Wilson. “The sort of which would have originally been performed at the People's Palace. It strives to eradicate the notion that organ recitals are highbrow, instead portraying the organ as one of fun alongside dignified splendour.”

The programme will be introduced by a short talk from Professor Preece, an expert on organs of the East End of London who has recently completed a book on the subject. He will give an overview of the People’s Palace organ and will talk on the former organs of the Beaumont Institution and the First People’s Palace – which was opened in 1887 by Queen Victoria.

Queen Mary’s Director of Music Alan Wilson is also a concert organist, harpsichordist, conductor and composer who has performed in both the UK and abroad. He is organist of the Bow Bells Church of St Mary-le-Bow, London, where he plays a recently built Kenneth Tickell instrument of distinction. He is an Honorary Associate of the Royal School of Church Music and a frequent broadcaster on the BBC’s Daily Service.

Entry to the recital is free but seats must be booked. A reception will follow the performance. http://organrecital.eventbrite.co.uk/

For further information about events taking place at the People’s Palace, visit http://www.qmul.ac.uk/peoplespalace