A Queen Mary University of London work experience scheme that supports its students and East End charities has been shortlisted in the Guardian University Awards 2014. 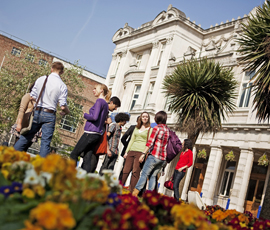 The QProjects Work Experience Scheme is one of three programmes in the running for Employability Initiative of the Year in the Guardian’s annual celebration of excellence and innovation in higher education.

QProjects places Queen Mary students into east London charities to deliver projects that would otherwise be delayed or not go ahead because of a lack of resources.

Students are given the opportunity to put their university studies into practice, acting as consultants; gaining workplace experience, tackling problems and leading on projects. Through QProjects, some 228 students were placed into 34 charities in 2012-13, including:

As part of the scheme, Queen Mary Careers and Enterprise team creates job profiles for students, shortlists and co-interviews candidates and pays their travel expenses. Queen Mary Students’ Union, which leads on volunteering at the university, partners the scheme.

All 34 participating charities have said they will take part in QProjects again or recommend it to another charity. A spokesperson for the Phoenix Education Trust describes the students as “exceptional”, adding: “They have been competent, confident and full of ideas. In this ever harder economic climate it is good to see a scheme like this which supports the community. QProjects is by far the best careers service initiative I have come across.”

Queen Mary is committed to raising graduate employment rates and aims to increase by 50 per cent the number of students volunteering in the local community by 2015.

The Guardian University Awards recognise and reward projects in universities that demonstrate innovation, collaborative delivery and meaningful impact both inside their institutions and beyond, with the potential to inspire others.

Winners will be announced on Wednesday 26 February 2014.