A conference to mark the 150th anniversary of the birth of the controversial Victorian author Arthur Morrison is being held at Queen Mary University of London on 2 November 2013. 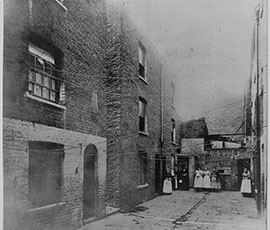 Morrison was born into a working-class family in Poplar but earned enough money as a writer to live a comfortable suburban life in Loughton.

He is best remembered for his realistic writings about working-class life in London's East End and his detective stories, featuring the character Martin Hewitt. His most famous work of fiction is the novel A Child of the Jago (1896), set in a Shoreditch slum.

This is the first academic conference to focus on Morrison and his works and will be held in the Octagon, Queen Mary, Mile End Road, on 2 November 2013.

Interestingly, Morrison himself was an employee of the old People’s Palace, the origins of Queen Mary, and he later edited the Palace Journal.

Dr Nadia Valman, from Queen Mary’s Department of English, who is organising the event, said: “Morrison caused a lot of controversy because critics thought his representation of brutality and violence in the East End was a caricature and sensationalist.”

The conference will be followed by a free public lecture by historian Sarah Wise, author of The Blackest Streets: The Life and Death of a Victorian Slum.