With its unprecedented access to top mandarins, industry leaders and politicians, and sustained business sponsorship, the Mile End Group - Queen Mary, University of London’s forum for political debate - has been held up by a leading policy thinktank as an example of a future model for UK universities. 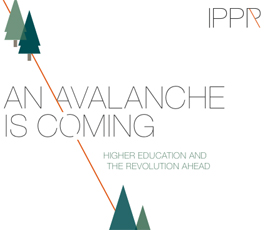 An Avalanche is Coming: Higher Education and the Revolution Ahead is the recent, widely-publicised, report on the future of British universities, by Sir Michael Barber, Katelyn Donnelly and Saad Rizvi for the Institute for Public Policy Research. Sir Michael Barber is Chief Education Advisor to Pearson, one of the world’s leading education companies.

The report urges British universities to do more to distinguish themselves and survive in a tough, global market; with tailored course content for particular audiences rather than generic programmes presently offered as a rule of thumb to students.

As a prime example of how traditional universities should position themselves, the report cites the Mile End Group at Queen Mary, for offering modern history students a rare opportunity to hear first-hand from leading figures in Whitehall, Parliament, Fleet Street and the City, past and present in their seminars.

The report praises MEG for providing access to a "fantastic set of additional materials" for students. Each MEG seminar is filmed and archived online for present and future students to download. Senior civil servants, business leaders and politicians also speak at MEG public lectures and discussions, which are free to attend and open to all who secure a ticket.

The report’s authors praised MEG's entrepreneurial academics for leveraging their contacts and using their physical proxmity to central London to ensure thought leaders in the political and business world can easily speak at, and attend events, which are also viewed as a valuable networking forum.

"Almost all the leading figures of the New Labour Government, including Tony Blair himself, have attended meetings of the Mile End Group and, in relaxed and academic surroundings, been willing to reflect on their successes and failures, moments of inspiration and mistakes," the report explains.

The MEG was created in December 2003 by doctoral students of Peter Hennessy, Attlee Professor of Contemporary British History at Queen Mary, as a forum for lively and informal discussion centred on the worlds of Westminster and Whitehall, past and present. In 2005, the Mile End Institute (for the Study of Government, Intelligence and Society) was created and in 2007 jointly-published two books. 2008 saw the launch of an undergraduate course focusing on The Blair Government, the first course in the country to take Tony Blair’s years at Number 10 as history. Guest speakers included Alastair Campbell, Lord Mandelson, Ed Balls and Blair himself.

MEG has links with a number of institutes and thinktanks and, since 2004, has received £500,000 in sponsorship from technology giant Hewlett Packard. Visiting Professors associated with the group include The Independent’s chief political commentator John Rentoul in Queen Mary’s School of History and Sir Nicholas Macpherson, Permanent Secretary at the Treasury, in the School of Economics and Finance.