The first book on controversial performance artist Ron Athey, penned by a drama lecturer at Queen Mary University of London, will launch at the Tate Modern in September. 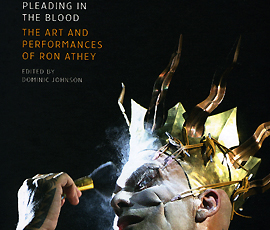 Pleading in the Blood: The Art and Performances of Ron Athey

Athey is an iconic figure in the development of contemporary art and performance, famed for his frequently bloody portrayals of life and death in the time of AIDS. Pushing himself to extreme physical limits, he explores key themes including: gender, sexuality, queer activism, body modification, tattooing, ritual and religion.

Pleading in the Blood: The Art and Performances of Ron Athey by Dr Dominic Johnson launches at the Tate Modern on Saturday 21 September. The evening will include presentations from both Athey and Johnson; screenings of short videos by Athey; readings from Pleading in the Blood; and special guests.

Ron Athey was Leverhulme Visiting Artist in the Centre for the History of the Emotions at Queen Mary in 2010 and has been a regular contributor to research and teaching at the university.

“Athey is a prolific, high-profile, and influential artist, but had never been the subject of a book. I wanted to fix that apparent oversight,” says the book’s editor Dominic Johnson. “I had worked with Athey in various capacities, including as a collaborator on a performance, and so I had direct access to him, to his archive, and also to his friends, peers, and collaborators - many of whom contributed essays or photographs to the book."

Pleading in the Blood: The Art and Performances of Ron Athey is published by Intellect Books and Live Art Development Agency for Intellect Live.

Tickets for the launch event are £5, concessions including students £4, and are available through the Tate Modern. For more information visit http://www.tate.org.uk/whats-on/tate-modern/film/pleading-blood-art-and-performances-ron-athey