A typed letter from the American poet T S Eliot has been uncovered in the archives at Queen Mary, University of London, after being hidden away for 40 years. 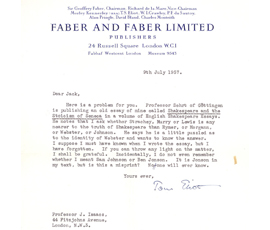 The letter dating back to 1957, was unearthed during an on-going project to catalogue the Jacob Isaacs Collection which will be made available to the public in May 2013.

Isaacs was a personal friend of the poet and a university lecturer at Queen Mary from 1952-1964. Prior to that he was the first Montefiore Professor of English at the Hebrew University of Jerusalem in Palestine from 1942-1945. The collection was donated to the university by his wife upon his death in 1973.

Dr Peter Howarth, Senior Lecturer in twentieth century literature at Queen Mary, said: “Eliot's work is currently under intense scrutiny because of the accusations of consistent anti-Semitism and equally vehement denials by Eliot's supporters. What's interesting about this letter is that it reinforces how Eliot's actual poetic ideas were being worked out with the help of a Jewish friend and fan. Isaacs was a drama specialist who was proud to have taken Eliot to the Music Hall in order to show him how audience identification works and he became one of Eliot's chief cheerleaders in University English.”

Queen Mary Archivist Lorraine Screene added: “We were surprised but very excited when we found the letter as it’s not been seen for 40 years and we had no idea it was in the collection.”

The letter was written on Faber and Faber headed paper, indicating it was typed at the publishing house where Eliot was employed as editor. In it Eliot asks Isaacs for help in recalling what he meant in one of his old essays, Shakespeare and the Stoicism of Seneca which was about to be republished by a Professor Sehrt of Gőttingen.

Professor Sehrt wanted clarification on the identity of Webster, who was referenced in the essay, but Eliot was unable to remember. Eliot concluded his reply on a rather pessimistic note by saying: “Incidentally, I do not even remember whether I meant Sam Johnson or Ben Jonson. It is Jonson in my text, but is this a misprint? No-one will ever know.’

The QM archive will be open to the public for the first time in a series of tours up until the 18 February 2013.

For more information on the archive or tours visit http://www.library.qmul.ac.uk/archives or email archive@qmul.ac.uk