A series of masterclasses, co-run by Queen Mary, University of London and the Royal Shakespeare Company (RSC) as part of a joint educational and artistic exchange between Brazil and the UK to celebrate the legacy of the iconic playwright, have been held in the city of Salvador. 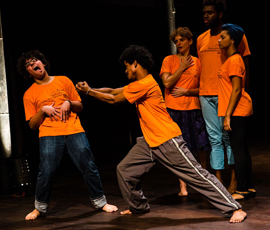 Shakespeare Forum, is part of the Transform project, and is supported by the British Council and co-funded by the Cultural Foundation of the State of Bahia (FUNCEB), which has Salvador as its capital city. The Forum aimed to inspire artists and audiences through creative workshops to enhance and develop the skills of actors, directors, theatre makers and teachers in working with Shakespeare’s language.

More than 80 people took part in various master-classes in February 2013 and speakers included Gustavo Franco, the ex-President of the Central Bank and the man who implemented the inflation-busting Plano Real in the 90s, giving an inspiring lecture on ‘Shakespeare and the emergence of capitalism’. Claudia Leitão, Federal Secretary of Creative Economy at the Ministry of Culture, responded with a speech linking the Golden Age of cultural production in Elizabethan London to the renaissance of the cultural industries in contemporary Britain.

Paul Heritage, Professor of Dance and Drama at Queen Mary, and Director of the People’s Palace Project, said: “This Forum celebrates Shakespeare in contemporary Brazilian contexts, bringing UK directors and academics to share their expertise and their passion with Brazilian actors, directors, students and audiences. This is a voyage of discovery to find the Brazilian in Shakespeare and the Shakespeare in Brazil - tropical and topical."

Also leading sessions during the Forum were the RSC’s legendary Voice Director, Cicely Berry OBE, Justin Audibert, Education Associate Practitioner and Michael Corbidge, Senior Voice and Text Practitioner as well as Dr Bridget Escolme, a senior lecturer in Drama at Queen Mary and a founder member of the Shakespeare in Performance network.

Professor Peter McOwan, Vice Principal for External Partnerships and Public Engagement at Queen Mary added: “This is a wonderful example of the international outreach work we do alongside our engagement with the local communities East London. This is a unique cultural exchange programme which shows the significance of Shakespeare on a global stage from the east end to Rio.”