Maria Delgado, a Professor of Theatre & Screen Arts in the School of English and Drama at Queen Mary, has been recognised with not one but two prestigious international awards. 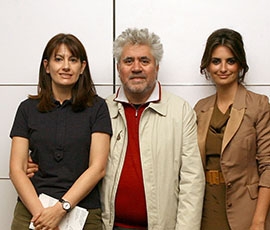 She has received the 2013 ATHE (association for theatre in higher education) Excellence in Editing Award and has been selected as the winner of The George Watson Fellowship.

The ATHE award honours an individual’s achievement in editing a single project. Professor Delgado won for her achievement both in editing Contemporary Theatre Review and a series of volumes about complex issues in fields as diverse as Spanish theatre, directing, and theatre and conflict.

The George Watson Fellowship from the University of Queensland was set up to encourage visits from scholars in the study of English, Media Studies and Art History in order that staff and students of the University may benefit from their special knowledge and experience.

Professor Delgado was chosen for her work across diverse spheres of theatre and film and gave her public lecture on the issue of historical memory in Spain and the controversial search for Lorca's corpse in 2009.

She is the first British scholar to receive the fellowship.

"I feel extremely honoured to have received both of these awards. The George Watson Fellowship allowed me to engage with key figures working across issues of memory and performance at the University of Queensland and to begin work on a project on editing with Professor Joanne Tompkins that arises in many ways from the ATHE award.”