Two Queen Mary, University of London academics are involved in one of the UK’s largest festivals dedicated to history this week. 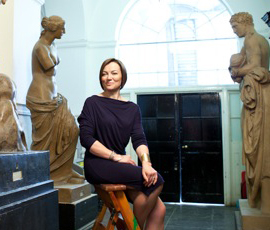 Over 30,000 people are expected to descend on the Chalk Valley History Festival (CVHF) in Wiltshire to savour seven days devoted to history.  CVHF will include speakers such as Boris Johnson, Tom Stoppard, Joanna Lumley, Rupert Everett and Ian Hislop – to name but a few – as well as Queen Mary’s Jerry Brotton and Amanda Vickery.

On Saturday Amanda Vickery, Professor in Early Modern History, who recently presented a BBC one-off special documentary Pride and Prejudice: Having A Ball will be speaking ‘On Love in the Time of Jane Austen’ as well as taking part in a panel debate on Presenting the Past with Martin Davison head of history for BBC.

Earlier in the week Jerry Brotton, Professor of Renaissance Studies and author of A History of the World in Twelve Maps, examined the significance of maps – from the mystical representations of ancient history to the satellite-derived imagery of today.