A new poll of grassroots Tories has revealed that if David Cameron loses the 2015 election, the Mayor of London, Boris Johnson has a clear head start in the race to replace him. 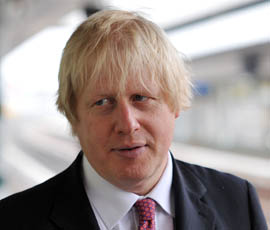 The academic survey designed by Tim Bale, Professor of Politics at Queen Mary, University of London and Professor Paul Webb of University of Sussex, was conducted by YouGov and funded by the McDougall Trust.

It shows that six out of 10 grassroots members believe David Cameron should resign should he fail to hang on to No 10 in 2015.  It also suggests that there is a big gap between the various runners and riders.

Professor Bale said: “Basically, our survey shows us that Cameron is toast if he can’t deliver the Tory Party a second term, and that Boris is best-placed to replace him, if he can get into the Commons, because he commands support that’s as deep as it is wide. May is running a credible second, but Gove’s support is narrower. Osborne maybe in with a chance but he will have to make up a lot of ground.  No one else looks like a serious prospect.”

Boris Johnson not only goes down particularly well in London, and he does better than the rest among younger members.

Professor Bale added: “Theresa May does well among women and appeals reasonably well to working class as well as middle-class members, which suggests that a May-led Tory party may attract more support among women and the fabled C2s.   You can’t rule out Gove or even Osborne. But in the end, Boris is the man to beat.”