Cabinet Secretaries who served from the time of Thatcher to Cameron will be giving a unique insight into their time in office in a series of films produced by Queen Mary, University of London in partnership with Number 10. 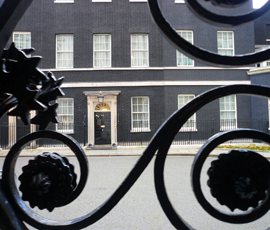 Men of Secrets: Cabinet Secretaries was funded by the university’s Centre for Public Engagement and produced by academics and students from the Mile End Group (MEG) Queen Mary’s forum for government and politics in partnership with Mile End Films, the university’s in-house production unit.

As the Prime Minister’s senior civil servant in the country, a Cabinet Secretary usually operates behind the scenes rather than in the spotlight and has a relatively low media profile. Now for the very first time five former cabinet secretaries - Robert Armstrong, Robin Butler, Richard Wilson, Andrew Turnbull and Gus O’Donnell will be providing new and compelling material about their role.

The first two films were launched at an event on 22 May 2013, with Lord Armstrong and Lord Butler recalling events with Lady Thatcher including the Brighton Bombing. The other films will be rolled out in the coming months. Lord Hennessy, Attlee Professor of contemporary British History at Queen Mary and Anthony Seldon, a political historian and commentator on British political leadership, carried out the interviews. The launch coincides with the publication of the National Archives’ first tranche of Cabinet Secretary papers (1936-1951) on 23 May 2013.

Lord Hennessy said: “Cabinet secretaries are among the rarest of rare breeds.  They have discretion built into the calcium of their bones.  So a chance to talk to them on the record across the whole range of their special calling is an occasion to be savoured”.

Political historian Dr Jon Davis, Director of MEG, added: “I’m absolutely delighted to see the release of this unique and invaluable resource unveiling the accounts of these 'Men of Secrets'. The partnership between Number 10, Mile End Film and MEG, highlights Queen Mary’s burgeoning strength in providing historical context to government with the highest of profile collaborations.”

The Number 10 website is hosting short clips of all the interviews at www.history.blog.gov.uk/category/cabinet-confidential while the full versions of the first two films will only be available at www.meg.qmul.ac.uk.

Peter McOwan, Vice Principal for Public Engagement at Queen Mary, said; “The coalition of the Mile End Group and Mile End Films has provided our History students with unique opportunities to develop their skills and knowledge by working in partnership with central government, creating a fascinating and personal video insight into the corridors of power.”

Mitchell Harris, a Queen Mary second year Film Studies student who was involved in the filming, added: “I found working on this project both exhilarating and terrifying at the same time, but working with Downing Street was a wonderful opportunity that not many people at university get to experience.”

Eleanor Hallam, a History MA student who attended and transcribed the interviews with Lord Butler and Lord O'Donnell concluded: "Having studied past governments through books and seminars, the interviews with the cabinet secretaries offered me unparalleled, live insights into the working relationships at the highest level of government. Sitting in Number10 and listening to Lord Butler recount the moment when the Brighton Bomb exploded in 1984 was particularly fascinating."