As BBC 1’s Ripper Street keeps audiences hooked and paid tours sell out across the city, Queen Mary University of London has brought some 300 years of colourful East End history to life through a free smartphone tour app. 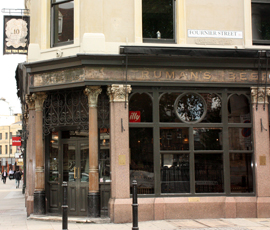 Starting at Liverpool Street Station and finishing in Stepney Green, the app allows you to explore historic east London at your own place, accompanied by the expertise of Queen Mary academics.

TV historian Amanda Vickery, geographer Alastair Owens, Jewish culture expert Nadia Valman and Parvati Nair, Director of the Centre for Migration Studies, are among the experts to lend their research, knowledge and voice to the free audio guide.

A narrator guides visitors from stop to stop, while oral history recordings and illustrative readings add colour to academic insight. A route map and directions can also be downloaded and printed out to accompany the audio experience.

Originally released in 2012 in time for the Olympic and Paralympic Games, the tour is now available to download to phones and MP3 players as an app, created by Tales & Tours for Queen Mary.

Taking around an hour to complete, the walk’s highlights include: