An award-winning play about the Latin American migrant community, which was inspired by research from an academic at Queen Mary, University of London, is currently being premiered in London at the Southwark Playhouse. 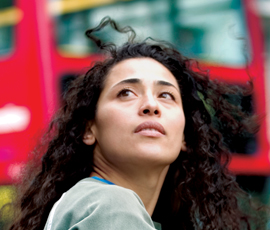 Juana in a Million is a one-woman show exploring the true stories of Latin American migrants to the UK. Emergent Mexican author-performer Vicky Araico Casas, together with director and co-writer Nir Paldi, wrote the play after reading Professor Cathy McIIwaine’s report No longer Invisible: The Latin American Community in London.

The study was the first of its kind to look at the Latin American community in London. It revealed that its population had grown four-fold since 2001 to over 110,000 making Latin Americans, including those from Brazil, Colombia, Ecuador, Bolivia and Peru one of the most significant parts of the city’s residents.

However, the increase of numbers also highlighted the social issues the community faced including English language difficulties, poor jobs prospects, limited access to welfare services as well as experiences of marginalisation and discrimination.

Juana in a Million, winner of a Fringe First Award at the Edinburgh Festival in 2012, weaves a moving tale of survival, betrayal and hope as it tells the story of a young Mexican woman arriving in London, with little more than dreams of security and happiness. Juana’s encounters in this strange foreign land shed unexpected lights on her identity as a woman and as a Mexican.

Professor McIIwaine, from the School of Geography, will be hosting a symposium about the play with its co-authors and director on 7 June at London's Southwark Playhouse. She said: “The play not only showcases the life of one particular Latin American migrant in London, but it powerfully highlights the experiences of Juana’s marginalisation and exclusion to an audience that might not necessarily be aware that they are one of the fastest growing yet discriminated groups in the London.”

The play runs until 15 June and is supported by FONCA and the representation of the European Union in Mexico; Arts Council England and the National Lottery.