Philosopher Jules Evans from Queen Mary, University of London is among 10 UK academics to win the title of BBC Radio 3 New Generation Thinker 2013 and turn their groundbreaking ideas into top broadcasting. 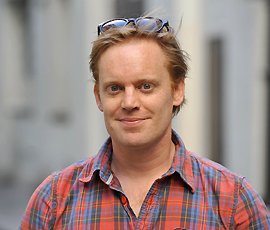 Hundreds of early-career academics applied to the scheme, which is now in its third year, before 50 finalists were selected to attend workshops and prove their passion for communicating original research. New Generation Thinkers is run by Radio 3, BBC Television Arts and the Arts and Humanities Research Council.

The winners will receive top-level mentoring and advice on how to develop their ideas into viable radio programmes, as well as the chance to shadow presenters and producers. They will present their own shows on Radio 3’s arts and ideas show Night Waves, make regular appearances on the channel to discuss their ideas, and deliver talks at Radio 3's annual Free Thinking Festival of Ideas at the Sage, Gateshead in October 2013. The academics will also have an opportunity to develop their ideas for television.

Jules Evans is a journalist, blogger and author of Philosophy for Life and Other Dangerous Situations, which is being published in 19 countries. He is Policy Director for the Centre for the History of the Emotions - part of the School of History at Queen Mary. He says: “The Centre has some very interesting people working at it, and has always been good at media engagement.”

Jules’ research looks at how individuals and communities are rediscovering the philosophies of Ancient Greece and Rome. Jules focuses on the direct influence of ancient philosophy on Cognitive Behavioural Therapy (CBT). He is also researching music’s power over the emotions, and the role of popular music in modern society.

Jules is co-organizer of the London Philosophy Club, the biggest philosophy club in the world, and has spoken at festivals including Latitude, Galway Arts Festival and the Month of Philosophy in Amsterdam. He recently completed a research project for the AHRC looking at the rise of philosophy clubs and the boom in informal learning.

He says: “I’m a big believer in academic outreach, in taking your ideas out to the public and seeing what they think. BBC Radio helps academics to do that, particularly Night Waves, which is a great platform for public thinking.”

In 2011, Dr Shahidha Bari and Dr Rachel Hewitt were both selected from the School of English and Drama, making Queen Mary the only university to have achieved a double win in the New Generation Thinkers scheme.

Jules blogs at www.philosophyforlife.org and for the Centre for the History of Emotions at emotionsblog.history.qmul.ac.uk/