Dealing with Difference: Jews, Muslims and the British Left Today

How the British Left deals with Jewish and Muslim difference is the latest subject up for debate in a lecture by Dr Brian Klug of the University of Oxford. 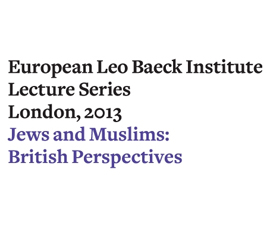 This event is part of a lecture series organised by the Leo Baeck Institute at Queen Mary, University of London under the title Jews and Muslims, British Perspectives. The series takes a look at British political, legal and cultural viewpoints on Jews and Muslims living in the UK from the last century to today.

In his lecture, Dealing with Difference; Jews, Muslims and the British Left Today, Dr Brian Klug argues that while the Left may have instinctively rallied to support newcomers in an increasingly multicultural society, they have struggled to deal with Muslim and Jewish difference when that difference is asserted by Jews and Muslims themselves.

Dr Klug is Senior Research Fellow in Philosophy at St Benet’s Hall, Oxford. He is an Honorary Fellow of the Parkes Institute for the Study of Jewish and non-Jewish Relations, University of Southampton, and in summer 2012 was Visiting Scholar at the International Centre for Muslim and non-Muslim Understanding, University of South Australia.

Dealing with Difference is the third lecture in the Jews and Muslims: British Perspectives series organised by the Leo Baeck Institute London and The Jewish Museum, in association with the Fritz Bauer Institute in Frankfurt.

The lecture will be held at the German Historical Institute London, 17 Bloomsbury Square, London WC1A 2NJ and begin at 6.30pm.

Admission is free but places are strictly limited and must be reserved in advance by contacting the Leo Baeck Institute, London: info@leobaeck.co.uk or 020 7882 5690.

The Leo Baeck Institute London is based at Queen Mary, University of London’s Mile End campus. With centres in London, New York and Jerusalem, it is the world’s leading research institute for the study of the history and culture of German speaking Jewry.