In her new book Professor Brigitte Granville warns governments not to think of inflation as yesterday’s problem. Present unsustainable levels of public debt could end up leading to high inflation – especially in the Eurozone. 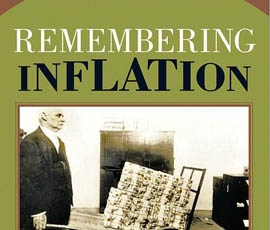 Today's global economy, with most developed nations experiencing very low inflation, seems a world apart from the 'Great Inflation' which spanned the 1960s through to the early 1980s.

In Remembering Inflation, Professor Brigitte Granville, from Queen Mary University of London’s School of Business and Management, fears there is a real danger of such times being forgotten in the wake of the global financial crisis of 2008 and the ensuing ‘balance sheet recession’ (that is, falling output caused by excessive debt).

Professor Granville, who specialises in international macro and monetary economics, comments: “The ‘dragon’ of inflation has been tamed in recent decades largely thanks to the breakthroughs in economic thinking which are the main subject of my book; but although high inflation is not a feature of today’s economic landscape, policymakers should keep learning the lessons of that past experience in order to address the far-reaching economic problems that we are now confronted with.”

She argues that the core challenge of restoring healthy growth might be facilitated by using the proven techniques of inflation targeting based on credibility (credibility being the essence of fiat money) to target a rate of inflation that is higher than present rates but does not risk getting out of control. For example, in the UK in the last few years, inflation has been allowed to run above the official target. For all the benefits of this in cushioning the economic downturn, the risks would be reduced by explicitly targeting this higher inflation level.

As Professor Granville says, “You need to give people clear and transparent messages so that you can manage expectations. If you don’t then people won’t trust governments or the central banks anymore. This is better for businesses so that they can plan for the future as they know the levels of inflation.”

Her book looks at the causes of inflation, and the relationship between inflation and other fundamental macroeconomic phenomena such as growth, unemployment and – above all – government debt. She shows how unsustainably high levels of government debt very often lead to high inflation. At present, this problem is particularly acute in the Eurozone, says Brigitte Granville adding that “The euro countries are caught in a debt trap. Unless the Eurozone breaks up in an orderly fashion before matters come to a head as a result of year upon year of economic stagnation (and the best way for that break-up to happen would be for Germany to leave), the troubled countries of the periphery – including France – will end up having to default on their public debt either by formal restructuring and/or by high inflation.”