Italy's Democratic party, front runners in this month's general election, has drawn criticism for political in-fighting, however such internal division (factionalism) is an issue that plagues all democratic governments, suggests an expert on European politics at Queen Mary, University of London. 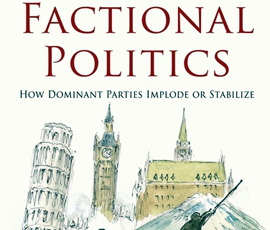 In her new book, Factional Politics: How Dominant Parties Implode or Stabilize, Dr Francoise Boucek, explores the paradox and potential dangers that factional politics can create for dominant political parties through bad governance, brand devaluation and the failure to manage internal conflict.

Her study focuses on the ideological, political and personal differences exposed within the British Conservatives, Liberal Democrats in Japan and Canada and the Christian Democratic Party of Italy.

Dr Boucek, from the School of Politics and International Relations, said: “In the book I am seeking to explain how this inherent factionalism that has caused the downfall of many political leaders can also prolong office tenure by containing conflict and preventing the exit of party dissidents.”

Dr Boucek will introduce her book and discuss its themes at a launch event on Tuesday 5 February at the Daiwa Foundation in London, with Professor Kensuke Takayasu of Seikei University in Tokyo.

The book launch is set against the background of the Japan’s general election in December last year, which saw the return to power of the Liberal Democrats, the renewed internal division over Europe in the British Conservative Party; and the forthcoming general election in Italy on Feb 25-26.