It’s been 200 years since Jane Austen's most famous novel Pride and Prejudice was published – it has since gone on to charm generations of readers through several TV and film adaptations. 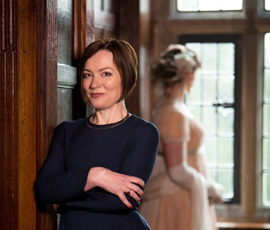 Now, as the nation celebrates the bicentenary of Austen's classic tome, the BBC will be paying tribute in a special one–off documentary Pride and Prejudice: Having A Ball fronted by Amanda Vickery, Professor in Early Modern History at Queen Mary, University of London on Friday 10 May.

Pride And Prejudice: Having A Ball will weave together the planning and rehearsal of a typical 19th–century ball, look back at first–hand testimony of ball–goers of the time, and will culminate with an authentic recreation based on Austen's Netherfield Ball – the event that marked a turning point in the romance between Elizabeth and Mr Darcy in the book.

Professor Vickery, says, "Elizabeth Bennet is one of literature's most loveable heroines and the journey she takes with Mr Darcy – from bristling hostility to sexual fascination and finally intelligent love – still enchants readers. It's the nation's favourite love story."

Amanda, who also fronted the BBC's The Many Lovers Of Miss Jane Austen in 2011, exploring how and why generations of readers have been won over by her novels, adds, "Throwing a spectacular ball is not only historically interesting, but it is a suitably festive way of celebrating Austen's achievement."

Pride and Prejudice: Having A Ball, May 10, BBC2