Amanda Vickery, Professor of Early Modern History, will co-front a BBC Two programme which recreates an entire Regency ball in honour of the 200th anniversary of the publication of Jane Austen’s popular novel Pride and Prejudice. 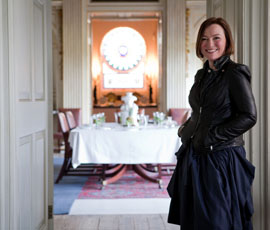 The Pride and Prejudice: Having a Ball at Easter, a 90-minute special to be broadcast in the spring, will re-stage the planning and rehearsals of an early 19th century ball using music, dancing, food and fashion, as well as, first-hand testimony of guests at the time. Pride and Prejudice celebrates its 200th anniversary on 28 January 2013.

For anyone interested in this period the Centre for Eighteenth Century Studies runs a series of free seminars throughout the year.

On 30 January Professor Malcolm Baker of University of California, will be talking about his new book The Marble Index: Roubiliac and Sculptural Portraiture in Eighteenth-Century Britain, focusing on the work of the American artist Alexander Pope.