A tale of two languages

Language undergraduates at Queen Mary, University of London, have been given the rare opportunity of getting their creative writing published in both English and Spanish. 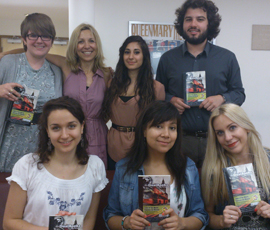 Tales of the World/Cuentos del Mundo, is produced by Dual Books, a Madrid based company specialized in bilingual editions that works in cooperation with Voces, a NGO that promotes humanitarian projects all over the world.

Following an internal competition nine final year BA Spanish language students at Queen Mary were selected to have their short-stories, which reflect on the ethnic and linguistic diversity of life in East London, published in the book.

The volume, which is accompanied by an audio version in both languages, has been inspired by the theme of the multiculturalism in the city and reflects the experiences of the authors as they come to the end of their undergraduate studies at Queen Mary.

The initiative is part of a joint academic project between Facultat de Magisteri Universitat de Valéncia and Queen Mary within the framework of Education for Sustainable Development to Preserve Linguistic and Cultural Diversity. Dr Mar Encinas-Puente, from Queen Mary’s School of Languages, Linguistics and Film, co-edited the book, together with Professor Chris J. Pountain.

‘Getting students to write creatively and then translate their own stories into Spanish is a fascinating way of teaching a language, perfectly compatible with critical writing and research’, remarked Dr Encinas. ‘Not only is it rare that undergraduates get their work published, it can also make them stand out in a crowded recruitment graduate marketplace, as the publication of their bi-lingual texts should make a substantial difference on their CVs for potential employers.’

Elizabeth Miller-Sanchez, one of the language students’ whose work was published, said: ‘I really enjoyed the experience of being able to write more creatively and it was actually much easier to translate my own words than someone else’s.’

The long-term aim of the project will include the collaboration of Mexican universities to translate stories into Spanish and English from Purepecha, an indigenous and endangered language. For each book sold £3 will go towards Voces - an organization that fights poverty promoting solidarity through art and culture.