Pregnant women, including those who are obese or overweight, should be encouraged to minimise weight gain through diet, according to major new research from Queen Mary, University of London. 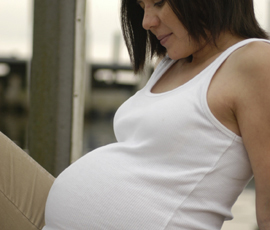 Piling on excess weight during pregnancy increases the risk of complications for pregnant women but doctors have been cautious in advising women on ways to manage weight for fear of any adverse effect on mother or baby.

However, the new study published in the BMJ shows that following a healthy diet, overseen by health professionals, stems excess weight gain in pregnancy and reduces the risk of pregnancy complications such as pre-eclampsia, diabetes, high blood pressure and early delivery.

Half the UK population are either overweight or obese and the rates are rising. Around a third of women gain more than the recommended amount during pregnancy.

Previous research has linked obesity during pregnancy with an increase in a variety of risks including high blood pressure, diabetes, miscarriage, birth defects, blood clots, pre-eclampsia, and even maternal and infant deaths.

The new research, which brings together the results of 44 separate studies, is the largest of its kind and includes data on more than 7,000 women. It was commissioned and funded by the NIHR’s Health Technology Assessment programme.

The researchers investigated the effect of diet, exercise, or a combination of the two. They looked at how much weight women gained throughout pregnancy and whether mother or child suffered from any complications.

Crucially, babies’ birth weights were not affected by dieting.

The research was led by Dr Shakila Thangaratinam, a Clinical Senior Lecturer and Consultant Obstetrician at Barts and The London Medical School, part of Queen Mary, University of London with researchers in UK and Europe. She said: “We are seeing more and more women who gain excess weight when they are pregnant and we know these women and their babies are at increased risk of complications.”

“Weight control is difficult but this study shows that by carefully advising women on weight management methods, especially diet, we can reduce weight gain during pregnancy. It also shows that following a controlled diet has the potential to reduce the risk of a number of pregnancy complications.

“Women may be concerned that dieting during pregnancy could have a negative impact on their babies. This research is reassuring because it showed that dieting is safe and that the baby’s weight isn’t affected.”

Dietary advice was based on limiting overall calorie intake; balancing protein, carbohydrate and fat; and eating foods such as whole grains, fruits, vegetables and pulses.

Dr Thangaratinam added: “What we don’t know is why diet should be so much better than exercise in controlling weight gain. It could be that it is simpler and easier for women to stick to. It may also be that eating a high-fibre diet has other positive health effects for a pregnant woman.”

Combining data on the thousands of women who participated in these trials will also allow researchers to further examine the effects of diet and exercise across women of various ages, body mass index, ethnicity, socioeconomic status and medical conditions.

The Women’s Health Research Unit at Queen Mary, University of London has recently established an international collaboration on Weight Management in Pregnancy (i-WIP) to answer these questions.