Somali immigrants to the UK and USA appear to integrate better and have fewer mental health problems if they are allowed to work and they receive practical support during the first few years of their time in the new country, according to a study led by researchers at Queen Mary, University of London (UK) and published in BioMed Central Public Health today (Friday). 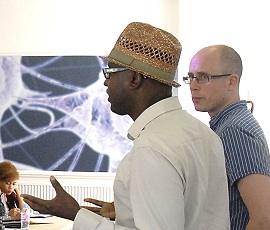 The study used a survey and focus groups to investigate the experiences of Somalis living in London (UK) and Minneapolis (USA). After adjusting for various factors such as age, sex and marital status, the researchers found that Somalis in London were six times more likely to suffer from major depression and four times more likely to have any psychological disorder than those who lived in Minneapolis.

Most of the 189 survey respondents and 47 focus group participants had a shared history of displacement and similar immigration experiences. Like the Olympic Gold medal athlete, Mo Farah, they came to the UK or USA because they were fleeing violence and human rights abuses in Somalia. However, 90 per cent were unemployed in London, compared to 26 per cent in Minneapolis; 98 per cent had obtained refugee status or citizenship in Minneapolis compared to 83 per cent in London.

“We found that participants from London were more likely to have their immigration cases pending, experienced more problems of family separation and were more likely to be unemployed than Minneapolis participants. However, if they were in employment, then the risk of major depression was lower,” said Dr Nasir Warfa, senior lecturer at the Centre for Psychiatry at the Wolfson Institute of Preventive Medicine, Barts and The London School of Medicine & Dentistry, part of Queen Mary, University of London.

Professor Kamaldeep Bhui, Professor of Epidemiology and Cultural Psychiatry at the Centre for Psychiatry, said: “We know that employment is a key public health intervention for psychological well-being of refugee populations. In Minneapolis, at present, refugees are supported when they arrive and are allowed to work. However, in London, they are not allowed to work until their immigration status has been processed and they have been given permission to stay in the country. Preventing an able and gifted population from working is not helpful and can be detrimental to the psychological wellbeing of refugee communities, and thus their prospects of successful integration in the long term.”

Women appeared to have better mental health than men, as men suffered from loss of their masculine identity due to being unemployed. Stigmatised refugee identity and reversal of traditional gender roles were also among the significant psychological problems found among the London and Minneapolis Somalis.

“If Somali immigrants are supported for the first few years of their time in a new country, and are able to work, they will do better and live economically active lives, with fewer mental health problems,” added Dr Warfa. “Whereas if these support mechanisms are not in place, then it can end up costing more in the long term because of ongoing health costs.”