A group of exceptional medical students are learning how lives can be saved immediately after serious injury, thanks to a training programme at Queen Mary, University of London. 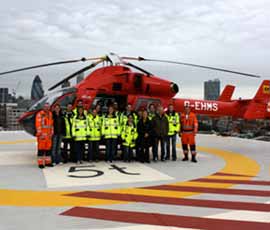 They have secured places on a unique student-led course called the Prehospital Care Programme. It gives them the opportunity to work with some of the UK’s best paramedics and trauma doctors, working shifts with the London Ambulance Service and London's Air Ambulance.

The programme, the first of its kind, gives the sort of hands-on experience of treating seriously ill patients that most doctors do not get until they are two or three years into their medical careers.

Prehospital care is an emerging specialism in medicine which concentrates on how lives can be saved or lost during the ‘golden hour’ following traumatic injury, at the scene or en route to hospital. Until recently, the majority of this care has been provided by paramedics and not by doctors.

The programme began in 2007 when an enthusiastic second year student, Emma Lightbody talked Dr Anne Weaver, lead clinician for London's Air Ambulance, into letting her tag along on a shift. She then persuaded a senior paramedic, Craig Cassidy to let her join him for an ambulance shift. After working on project with senior lecturer, Dr Danë Goodsman, Emma approached all three about setting up a programme that would allow other students to train in prehospital care.

From then it has blossomed into a major component of the curriculum run at Barts and The London Medical School by Goodsman, Cassidy and Weaver, along with a current student leader. Only ten students can join each year and places are highly sought-after. Students who win places on the course regularly work emergency shifts, write reports on the cases they attend and are mentored by paramedics and trauma doctors.

First year medical students have to attend monthly academic forums before they can apply to join in their second year. The forums are run by students already taking part in the programme and they, along with paramedics and trauma clinicians present and discuss interesting case studies of emergencies they have attended. This month, for example, was themed around burns and case studies ranged from an infant scolded by a hot cup of tea to a major house fire in which only two of the six residents could be saved.

These open forums have proved popular; regularly attracting around a hundred students, not only from Barts and The London, but also students and staff from other medical schools, and trainee paramedics.

The programme’s student leader is currently Saoirse Lyons, a fourth year medical student from Berkshire who was already a philosophy graduate when she began her medical training.

She said: “When students present at the forums about cases they’ve seen, it’s easier for other students to relate to them. Those who are presenting gain valuable presentation skills which they will use throughout their medical careers.

“Through the programme we’re regularly exposed to people who are really unwell. This experience makes us more confident in assessing patients and recognising which patients are the most unwell and need the most urgent care.

Academic lead for the programme, Dr Danë Goodsman said: “Because a team of students help run the course, the programme fosters teamwork as well as developing the students’ clinical skills and experience.

“It’s common for medical students to enhance their training with extra-curricula activity but this programme is unique in being a student-led initiative that is part of the formal medical curriculum.

“Other medical schools have been impressed with the programme and a few are in the process of setting up something similar.”

For more information about the Prehospital Care Programme, visit http://prehospitalcareprogramme.org/index.html.