New research from Queen Mary, University of London, has revealed huge variation in the salt levels found in supermarket bacon, with some products containing more than half the daily recommendation of salt in just two rashers. 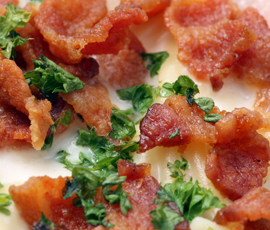 Bacon is now the second biggest contributor of salt to the UK diet, after bread [1].  But a new survey, from the Consensus Action on Salt and Health (CASH), based at QM’s Barts and The London School of Medicine and Denstitry, has found the saltiness of bacon can vary greatly, even within the same supermarket.

The survey looked at 130 products from seven leading retailers:  ASDA, Sainsbury’s, Tesco, Morrisons, Marks &Spencer, Waitrose and The Co-operative. Data was collected in store during August 2012 and information was checked on company websites. Examples of high salt levels included:

An example of the variation found within supermarkets included Morrisons’ Savers Smoked Rindless Back Bacon, which containedthree times more salt than Morrisons’ The Best Applewood Smoked Dry Cured Back Bacon (6.8g/100g vs. 2g/100g). While Sainsbury’s Reduced salt Danish back bacon rashers smoked containedless than half the amount of salt than its Taste The Difference Unsmoked Wiltshire cured outdoor bred bacon rashers (2.95g/100g vs.5.58g/100g).

Graham MacGregor, Professor of Cardiovascular Medicine at the Wolfson Institute of Preventive Medicine at Queen Mary, University of London, and chairman of CASH, said: “For every one gram reduction in salt intake we can prevent 12,000 heart attacks, strokes and heart failure, half of which would have been fatal.

“As bacon is now such a big contributor of salt to our diet it is vital that the Department of Health ensures that manufacturers reduce the salt in these incredibly salty bacon products immediately.”

In addition to the high levels of salt in some products, the survey also found inconsistencies in the information provided to shoppers, with some companies opting for traffic light labelling, others for Guideline Daily Amounts and some for nothing at all, making it difficult for people to make an informed choice.

Hannah Brinsden, CASH Nutritionist, said: “In times of austerity we have a lot on our minds already, without the extra worry that our budget meal choices contain too much salt. It is down to manufacturers to ensure that the salt in bacon is reduced and to provide us with a consistent labelling system so we are able to choose lower salt products and protect our health.”

Further information can be found at www.actiononsalt.org.uk