Research looks at impact of asthma, social deprivation and ethnicity on educational performance

Research led by Queen Mary, University of London has found that having asthma is not linked to poorer scores in national school examinations. In contrast, ethnicity and social deprivation were associated with poorer educational outcomes in the study, published in the journal PLOS ONE. 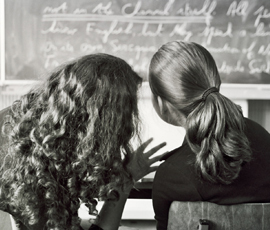 Long-term conditions in childhood – of which asthma is now the most common – may have a major impact on educational performance.  However, in one of the world’s first studies to link health, housing, benefits and educational data in over 12,000 children, researchers from Queen Mary, University of Edinburgh and City University found no detrimental effect of asthma on educational outcomes.

Chris Griffiths, Professor of Primary Care at the Centre for Primary Care and Public Health, at the Blizard Institute, part of Queen Mary University of London, said: “We wanted to test whether asthma is linked with poorer academic achievement as this could affect a child's chances of success later on in life. Instead we found children with asthma did as well as, or slightly better than their peers in these tests.

“These findings will reassure parents of children with asthma - and teachers.  Policymakers should target social deprivation and ethnicity in order to improve our children’s educational attainment.”

The research looked at data for 12,136 children from 97 schools in the east London borough of Tower Hamlets – the UK’s third most deprived borough. Each child had sat at least one national examination at Key Stages 1-3 over a four-year period. Researchers analysed the children’s educational results alongside clinical, housing and benefits data to measure the effect of asthma, social adversity and ethnicity.

Social adversity was linked to significantly poorer results as were mental health problems and special educational needs. Bangladeshi children were found to have significantly worse results than white children, although this was not the case for those from other minority ethnic backgrounds.

Illness associated with asthma is particularly high in both deprived and multi-ethnic populations. This is the first large-scale study to assess its effect on educational attainment in such a population.

Malayka Rahman, Research Analysis and Communications Officer at Asthma UK, which funded the research, said: “On average there are two children with asthma in every classroom in the UK, and whilst this research indicates that having asthma is not linked to poor examination results, it is still important to note that asthma can have a huge impact on the lives of children with the condition. Asthma hospitalises a child every 17 minutes in the UK so it is crucial that parents and children receive support and understanding regarding their condition.

“We would be keen to see this research developed further in the future to explore whether severity of asthma has more of an impact on exam performance, which may mean that particular resources could be developed specifically for those who are most at risk to ensure that they are able to complete their studies to the best of their abilities.”