Queen Mary wins Research Project of the Year at THE Awards

Queen Mary, University of London, has picked up the Research Project of the Year at the annual Times Higher Education Awards. 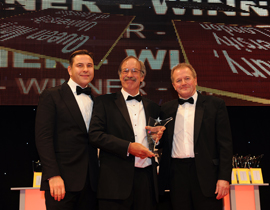 The award was announced at a ceremony at the Grosvenor House Hotel on Thursday 29 November and is for research led by Queen Mary's Professor Attila Lorincz.

Professor Lorincz, from the university’s Wolfson Institute of Preventive Medicine, led research to develop a new screening test to detect the virus that causes cervical cancer.  In poorer nations where there is no screening, hundreds of thousands of women die unnecessarily from cervical cancer every year.

In a study of 20,000 women in rural Mexico, a new DIY test picked up more than four times as many cases of cervical cancer and more than three times as many cases of a pre-cancerous condition as a traditional smear test. And crucially, uptake for the at-home test was higher than for the smear test suggesting that women prefer this type of screening.

The trial in Mexico was published in The Lancet in November 2011 and gained substantial international media coverage including the BBC world service, Chicago Tribune and China Post.

Professor Lorincz said: "I'm thrilled to have won the award. This work represents the culmination of around 10 years of work trying to bring improved cervical cancer screening to poor women in Mexico.

"I think it is not just of relevance in that country but also for underserved women in all parts of the world and could be an important measure going forward."

Now in their eighth year, the THE Awards are a highlight of the academic calendar. There were 18 categories this year, with Queen Mary shortlisted in three.

The SuperCollider Symposium 2012 – a week-long celebration of the creation of sound and music through the medium of computer programming – was a finalist in the Excellence and Innovation in the Arts award.

‘Trauma Surgery: The Science of the Bleeding Obvious!’ was nominated for Widening Participation Initiative of the Year. The interactive mobile exhibit is aimed at raising awareness of trauma and research into traumatic injury. It was designed by a team from Queen Mary’s Centre for Neuroscience and Trauma to inspire the next generation of scientists and healthcare professionals and was presented at the Big Bang Fair in March 2012.