Researchers from Queen Mary, University of London, are part of a new consortium which will study the link between Alzheimer’s disease and Down’s syndrome in an attempt to better understand the degenerative disease and predict as early as in infancy which individuals are most at risk. 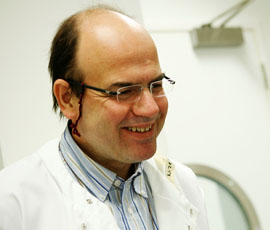 The London Down Syndrome Consortium – LonDownS – is bringing together researchers from across the capital’s universities, working in a broad range of disciplines. Professor Dean Nizetic, from the Blizard Institute at Queen Mary will bring his expertise in stem cell research to the group.

For Queen Mary, being an important part of this consortium is a continuation of a historic link: Down’s syndrome is named after John Langdon Down, who was a student of the Royal London Medical College, and published the first description of the syndrome in London Hospital Reports in 1866.

Adults with Down’s syndrome are at a much greater risk of developing Alzheimer’s disease than the general population and onset tends to occur at an earlier age. One of the reasons for this is believed to be the fact that one of the key genes implicated in Alzheimer’s – the amyloid beta (A4) precursor protein, or APP, gene – is found on chromosome 21; people with Down’s syndrome carry three copies of this chromosome.

Alzheimer’s disease involves the build-up of amyloid beta ‘plaques’ in the brain, potentially leading to gradual loss of brain function, confusion and complete loss of short-term and long-term memory. However, a significant proportion (up to 50%) of people with Down’s syndrome will show no symptoms, even though autopsies reveal that they are very likely to have the build-up of plaques characteristic of the disease.

Participants from three cohorts – infants, young adults and adults aged 45 years and above – will be asked for DNA and hair samples, which researchers at UCL will use to identify the genes involved in cognitive function and ageing in Down’s syndrome and to identify which genes increase the risk of developing Alzheimer’s disease and which offer protection.

Professor Nizetic will use this knowledge and samples to develop induced-pluripotent stem cells with characteristics of Down’s syndrome – stem cells are the body’s master cells, which can develop in a culture dish into specialised cells (such as brain cells); they can be used to identify changes in genes that affect the cells’ behaviour in culture, and chemical compounds that correct the anomalies. In this, Professor Nizetic will work with two other Blizard Institute scientists, Professor Mike Philpott and Dr Cleo Bishop, who are also collaborators on the LonDownS project.

Other members of the consortium will study the function of analogous genes in mice developed to model Down’s syndrome, and look at how to address difficulties in developing relevant cognitive tests for infants and children with Down’s syndrome.

The researchers hope that by bringing together such diverse disciplines, they will better understand the biology of Down’s syndrome and how genes influence brain function throughout life in people with the condition. Ultimately, they hope this will lead to treatments which can be tested in clinical trials and used to halt the decline in brain function and possibly reverse the effects of Alzheimer’s.

The five-year study is being led by Dr André Strydom, an adult clinical psychiatrist at UCL (University College London).  LonDownS is being funded by a £2.5 million Strategic Award from the Wellcome Trust.