Dr Adrian Biddle of Queen Mary, University of London has been awarded a David Sainsbury Fellowship from the National Centre for the Replacement, Refinement and Reduction of Animals in Research (NC3Rs) for his work in developing a lab test based on human cells to replace the use of mice in testing potential drugs that target cancer cells. 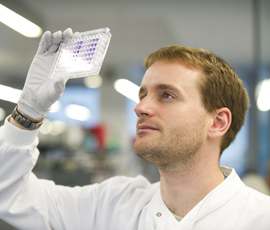 A major problem in cancer therapy is that tumours can become resistant to the drugs being used to treat the cancer. Recent work suggests that only a small fraction of the total cancer cells, the cancer stem cells, are responsible for this. These highly malignant and drug-resistant cells remain at the site of the tumour, causing it to recur and spread.

A large proportion of cancer drug testing is performed in mice as there has been a lack of suitable in vitro models and doubts over their relevance. Many millions of mice are used annually in cancer drug development; in the UK, over 400,000 mice were used in non-toxicology cancer research in 2010. Dr Biddle, who is based at the Blizard Institute at QM, will develop an in vitro model with the potential to reduce dramatically the numbers of mice used in cancer research.

Current animal models use xenotransplantion, where human cancer cells are transplanted into mice and tumour development monitored. As well as resulting in disease and suffering for the mice, this technique is also slow and expensive and does not yield much information about the behaviours of the different types of cell within the tumour.

This information is vital in developing possible treatments as, for example, Dr Biddle has already carried out research supported by the NC3Rs to show that cancer stem cells in oral cancers can switch between two different identities, one that drives growth of the tumour and one that drives its spread (metastases), both of which are resistant to being killed by existing therapies and seem to display separate forms of drug resistance.

This means that both types of cell must be targeted to develop therapies that kill all malignant cells and thus prevent tumour recurrence. This novel information had not been obtained over many years of using mouse models to study differences in cancer stem cells.

The David Sainsbury Fellowship scheme was launched in 2011 and is named in honour of Lord Sainsbury, the former minister for science who was responsible for setting up the NC3Rs. Four fellowships have been given to exceptional scientists who are at an early stage in their careers to enable them to establish independent research careers while developing alternatives to animal experimentation and improving animal welfare.

Commenting on the awards, Lord Sainsbury of Turville said: "The awards have been made to an impressive group of early career scientists who I am sure will, as a result of their fellowships, be great ambassadors - for research to replace, reduce and refine the use of animals - throughout their careers”.

Dr Biddle will use his Fellowship to develop and validate his test system so that it can be used for investigating the mechanisms that underlie drug resistance by the cancer stem cells as well as for high-throughput screening of potential drug treatments. He will compare the results of the human cell line model with samples taken from tumours grown on mice to demonstrate that the in vitro model gives comparable results to using animal models.