Public to meet Joseph Merrick for the first time, thanks to replica skeleton

Almost 150 years after the birth of Joseph Merrick – aka The Elephant Man - an exact replica of his skeleton has been created from digital 3D scans of his fragile remains. 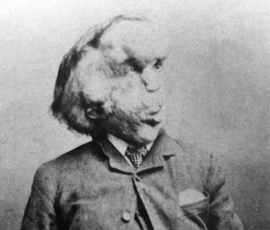 The replica skeleton will be on display for the first time at the Royal London Museum from today.

At the same time scientists are planning to extract and test DNA from Merrick’s bones, which are held in the private pathology collection at Barts and the London School of Medicine and Dentistry, Queen Mary, University of London.

Merrick was cared for until the end of his life at the Royal London Hospital by surgeon Frederick Treves. Following his death, his bones were kept at the medical school in the hopes that they might aid teaching or medical research.

The new replica will join an existing display on Merrick which includes his hat and mask, photos, and an intricate paper model of a church he made while living at the hospital.

It reflects the remarkable life Merrick led, despite his numerous disabilities and the lack of treatments available at the time.

After much debate, experts now suspect Merrick’s condition was a disorder known as Proteus syndrome, an exceptionally rare medical problem that causes bones, skin and other tissue to grow excessively. Most recently researchers in the USA have identified a genetic cause of Proteus.

With these new insights into the disease, researchers at Queen Mary are planning to finally confirm that Merrick’s condition was indeed caused by Proteus syndrome. They are working with colleagues at the National Institutes of Health, USA to test DNA extracted from the delicate remains.

Professor Richard Trembath, Vice Principal for Health at Queen Mary, University of London said: “During Joseph Merrick’s life little was understood about his condition and how he could be helped. Current research on the genetic causes of disease mean we can now understand and ultimately treat those living with rare diseases.

“We hope those who come to visit the museum will see the replica skeleton and gain some understanding of how hard it must have been for Joseph Merrick to walk, talk and lead a normal life.”

The Royal London Museum is open Tuesday to Friday from 10am to 4.30pm. Admission is free but donations are welcome.

You can hear more about the exhibition on Joseph Merrick in this podcast with museum curator, Jonathan Evans.

Other podcasts including the history of the medical school are available at: /qmpublic/media/av/podcasts/index.html