A documentary featuring a leading forensic pathologist based at Queen Mary, University of London has been honoured by the Royal Television Society at its annual celebration of excellence in television programming. 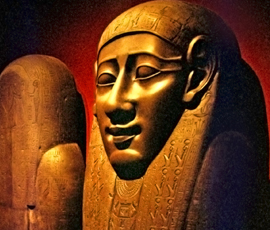 Described by The Independent as “completely engrossing”, Mummifying Alan was produced by Blink Film for Channel 4 and originally aired on 24 October 2011 to viewing figures of 1.8 million people.

Professor Peter Vanezis at Queen Mary’s William Harvey Institute played an integral part in the first mummification of a body for three millennia. He was involved in removing the body’s internal organs as part of the mummification process, replicating the way the Egyptians preserved bodies during the 18th century ‘Golden Age’ of ancient Egypt.

The body used in the mummification was that of Alan Billis, a taxi driver from Torquay in Devon, who was diagnosed with terminal lung cancer and decided to donate his body to the mummification project before he died.

Alan’s decision to donate his body to science for the ground-breaking documentary, Mummifying Alan: Egypt’s Last Secret, had the full support of his family.

Professor Vanezis was part of a team of scientists which removed all of Alan’s vital organs, except his heart, through a 10-centimetre incision on his left-hand side.

“It was an unusual and incredible method the Egyptians used for removing the body’s organs. I found it quite incredible that you could take all of them out through such a small hole,” Professor Vanezis said.

“The skin itself has a leathery appearance which indicates that he has become mummified all over. It makes me very confident that his tissues have been mummified correctly and in a very successful manner.”

The organs were then put into Canopic jars for preservation and the body cavity was sterilised with alcohol and repacked with small bags of linen to restore its appearance.

The rest of the process involved drying out the body, coating it in beeswax and sesame oil and wrapping it up with linen bandages in the same way as the ancient pharaohs.