Most professional English football teams do not comply with international guidelines on concussion that ensure that players are safe to return to play, suggests new research from Queen Mary, University of London published in the British Journal of Sports Medicine 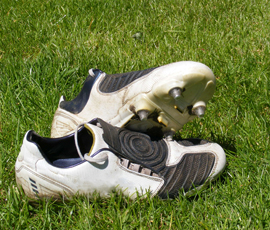 The Consensus in Sport (CIS) guidelines, first developed in 2001 and advocated by FIFA, stipulate that all players must undergo cognitive assessment and be thoroughly tested for concussive symptoms before the season starts, with those deemed to be concussed gradually returned to play, and only when free of all symptoms.

After a high profile incident in 2007 during a cup final, the Football Association clarified its recommendations on concussion for club medical officers. However, there is no guidance on how to recognise the signs and symptoms of concussion or any requirement for club doctors to demonstrate any expertise in concussion management, the authors point out.

The research was led by Dr Jo Price, as part of her Masters studies at the Centre for Sports and Exercise Medicine,at Barts and The London School of Medicine and Dentistry, Queen Mary, University of London. A questionnaire was sent to all 92 clubs in the English Football League, which is divided up into four separate leagues—Premier League, Championship League, and Leagues 1 and 2—at the start of the 2009/10 football season.

The response rate was 39 per cent, with similar proportions of completed questionnaires returned by each of the leagues. Around one in four (28 per cent) clubs across all the leagues said that they had not heard of the CIS guidelines.

Dr Price, a GP at the Jubilee Street Practice on Commercial Road, said: “Since 2001, FIFA has issued guidelines for the safe return to play of concussed players. This study shows that most professional English football teams do not follow these recommendations, potentially putting their players at risk.”

Fewer than half (44 per cent) of the Premiership teams routinely carried out a cognitive assessment before the season got under way, although they completed significantly more of these than any of the other leagues. Similarly, only one in 10 teams carried out a concussion symptom score.

Following a concussion, over half the Premier League and Championship clubs used tests that measure both cognitive assessment and symptoms, as recommended. However, few teams surveyed deployed the pre-season cognitive assessment in their evaluation and the recommended stepwise return to play, with a review of symptoms every 24 hours, was not widely enforced.

Almost half (44 per cent) of teams did not comply with CIS guidelines, which indicate that the earliest a player could return to play would be six days, and that no fixed rest period should be applied.

The length of rest periods varied from three to 28 days, the survey responses showed, with fixed rest periods applied by several teams in the lower leagues and one premier league club enforcing a two week rest period.