Blood collected from newborn babies by a heel prick immediately after birth has been used routinely in most developed countries for decades to screen for diseases such as cystic fibrosis and sickle cell disorders. 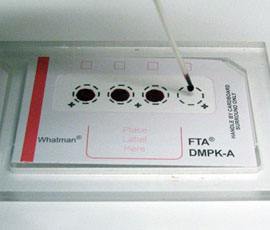 The blood is collected onto a piece of paper called a Guthrie card, and these are often stored for years after the initial screening has taken place.

Now researchers at the Blizard Institute at Barts and The London School of Medicine and Dentistry, part of Queen Mary, University of London, have shown that the genetic information stored on these cards provides a retrospective view of the epigenome at birth. The epigenome is a record of the chemical changes that influence gene expression and that may be involved in the development of diseases and conditions in later life.

DNA methylation, an epigenetic chemical modification of DNA, is known to affect gene activity and it plays a role in normal development, aging, and also in diseases such as heart disease, diabetes, and cancer. "But are these epigenetic marks involved in causing the disease, or a result of the disease itself?" asked Dr Vardhman Rakyan, a senior lecturer at the Centre for Diabetes at the Blizard Institute and co-senior author of the study, which is published online in Genome Research *.

Dr Rakyan explained that it was impossible to know this when samples had been obtained after onset of the disease. Guthrie cards might offer a snapshot of the epigenome before disease develops, enabling researchers to search for differences between epigenomes of healthy people and those who develop a disease, as well as comparing the epigenetic information before a person became ill with the epigenome after a disease had developed.

Dr Rakyan and an international group of colleagues looked at DNA methylation contained within the blood spots on the Guthrie cards. They found that this archived DNA yielded high quality methylation data compared to fresh samples. Then they compared the DNA methylation profiles of newborns to those in the same healthy children at the age of three, looking for epigenetic variations detected in the Guthrie card sample that were stable into the early years of life.

He concluded: “Guthrie card methylomics is a potentially powerful new application for archived blood spots, which could provide a wealth of information about epigenetics and disease, and could give clues about health later in life.”

Professor David Leslie, professor of diabetes and autoimmunity at the Blizard Institute and co-senior author of the study, added that because national health authorities routinely made Guthrie cards available, and so long as proper consent was obtained from parents and children, "we are talking about an invaluable, and non-renewable, resource for millions of individuals."