A new study from researchers at Queen Mary, University of London reveals the many difficulties faced by people with diabetes in self-managing their disease. 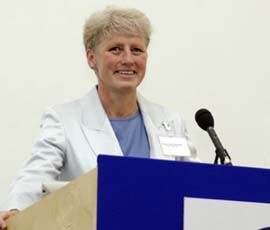 People with diabetes have to invest a great deal of time and effort to manage their condition. This includes not only monitoring the level of sugar in their blood, organising their medication and following a restrictive diet but also social challenges such as negotiating relatives’ input and gaining access to doctors when they need to.

In Britain the primary strategy for helping patients is a short educational course on how to self-manage the condition. The new research suggests that this approach is unlikely to succeed in isolation because it ignores the many factors that are outside the patients’ control such as food labelling in restaurants, local availability of healthy foods and the expectations and behaviour of other people within family members, at school and at work.

Diabetes is an incurable disease which can have serious complications such as heart disease, kidney failure and blindness. It affects 2.6 million people in the UK and this figure is predicted to rise to four million by 2025.

Only around one per cent of a diabetic person’s time is spent in the company of health professionals. The remaining 99 per cent of the time, the patient is managing their own diabetes.

The research was an ‘ethnographic’ study which looked in depth at a small group of 30 people with diabetes. Their ages ranged from five to 88 and they included different ethnic groups to reflect the fact that diabetes is particularly common in South Asians. Researchers shadowed the people for several periods of between two and five hours while they were going about their daily lives, noting how they managed their condition and the challenges they faced.

Trisha Greenhalgh, Professor of Primary Health Care at Barts and The London Medical School, Queen Mary, University of London, led the study. She said: “Until now there has been very little research on what people with diabetes do and how they cope when health professionals aren’t around. We have shown that self-management of diabetes is hard work both practically and emotionally, and that many but not all people with diabetes are skilful at undertaking and co-ordinating all the different tasks involved.”

The research showed that people with diabetes and their families devoted a lot of time and hard work to managing their disease. For those who were not managing well, the reasons tended to be that they were overstretched by family responsibilities, had other illnesses, were struggling financially or a combination of these. Many had other medical conditions, some very serious for example paralysis following a stroke, visual impairment or heart failure. These factors severely limited people’s opportunities to manage their condition, meaning that those who would benefit most from self-management were also those least able to achieve it.

Lack of food labelling in cafes and restaurants also proved challenging because it made calculating the correct dose of insulin difficult.

Some but not all health professionals were enthusiastic about people acquiring advanced knowledge about their diabetes and learning how to self-manage.

Professor Greenhalgh added: “There is a trend towards encouraging individuals to look after their own health. This study highlights that whilst many people with diabetes are ready and able to do this, health professionals and wider society could be doing more to support them. Sadly there is still a great deal of ignorance, stigma and stereotyping.

“We need to know a lot more about how patients manage their disease outside of the clinic. In the meantime, doctors should be aware of the work their patients put in to self-management and understand that many factors will influence how successful they are at controlling their diabetes.”

The research was funded by the Department of Health and the National Institute for Health Research and published in BMC Health Services Research.