Queen Mary helping to inspire the next generation of scientists

Students from five secondary schools, who have been working with researchers from universities including Queen Mary, University of London, will be presenting their work at their own ‘scientific conference’ this month. 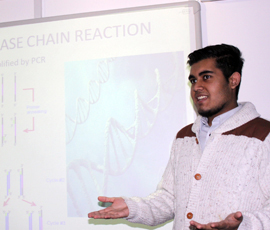 Queen Mary is one of five universities that have been working with secondary school pupils as part of a unique initiative aimed at inspiring the next generation of scientific researchers. Supported by a Wellcome Trust Society Award, the scheme gives students the chance to take part in research projects in their own school under the guidance of university researchers.

Students from St Paul’s Way Trust School in Tower Hamlets have been working with researchers from Queen Mary and St Paul’s Way Medical Centre on a project around type-2 diabetes – a condition that is highly prevalent in the Bangladeshi community, which makes up a large proportion of the school’s student body.

As part of the work, the students plan to carry out a lifestyle questionnaire on the local population and then link this to a screen of a possible candidate gene associated with type-2 diabetes and obesity. They are being supported by Graham Hitman, Professor of Molecular Medicine and Diabetes at Barts and The London School of Medicine and Dentistry, part of Queen Mary, who is an expert on diabetes in South Asian populations and Dr Joe Hall from the St Paul’s Way Medical Centre.

A total of 15 students from Years 12 and 13 are taking part in the project which began in January 2012 and runs for three years. To date the students have chosen the subject area for research and prepared posters and a talk for next week’s conference. Laboratory work will start in 2013.

Professor Peter Heathcote from the School of Biological and Chemical Sciences, who led the application for Queen Mary, said: “The project aims to inspire students and fire up their enthusiasm for scientific research. It’s very rewarding to see the excitement with which the students have approached the project so far.

“The scheme was originally piloted in Kent where it sparked a substantial increase in students going on to study Biology at A-level and it would be fantastic if we could do the same.”

Each school receives a grant to pay for a senior teacher and senior technician to have half a day per week to run and organise their research project. The grant also enables the schools to buy basic laboratory equipment to run their project.

Students taking part in the scheme will present their work at the inaugural Authentic Biology Research Symposium on 17 December.