QM students host publishing event for insight into the industry

Comparative Literature students at Queen Mary, University of London were visited by the founder of an independent poetry press last week, for tips on becoming a success in the publishing industry. 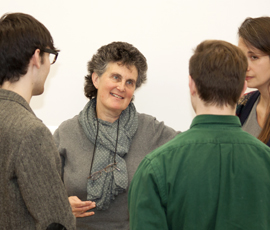 Some 20 students attended the seminar on Thursday 1 November, led by Candlestick Press creator Jenny Swann and organised by third year students Will Hall and Patrick Chester as part of their editorial role at Queen Mary Review. The Review is produced by students at Queen Mary and devoted to their creative writing and literary journalism.

Comparative Literature student Patrick Chester comments: “We hope the event provided people with an understanding of the publishing industry, through meeting someone with practical experience, and that they received good advice on how to get published. It also gave us a chance to meet people studying at Queen Mary who are interested in publishing and may wish to get involved with the Queen Mary Review in an editorial role.”

Kiera Vaclavik, Senior Lecturer in French and Comparative Literature asked her students to help organise the seminar. She says: “Publishing is a popular career path for Comparative Literature students, so these events are a unique opportunity for students to network and put questions to someone working within an industry they may be interested in after graduating. As well as making a contact in the publishing world, they now have a good understanding of what the industry involves, and how best to go about starting their careers.”

Publisher Jenny Swann studied English Literature and the History of Art before working in museums, including the Victoria and Albert. After working as a freelance author, lecturer and poetry editor, she set up Candlestick Press in 2008. The small independent business has been a huge success, printing attractive poetry pamphlets as an alternative to a mainstream greetings card.

Swann also joined Comparative Literature students working on the Constellations Project, a growing library of online anthologies. Launching at the end of the academic year, it intends to ‘span the cultural cosmos’, bringing together a selection of poems, plays, songs, short stories and other diverse texts that bridge centuries and cultures. Each is accompanied by an introductory essay and a series of commentaries from the student contributors.