The British Academy has elected 38 new Fellows, including Professor Miles Ogborn, current Head of the School of Geography at Queen Mary, University of London. 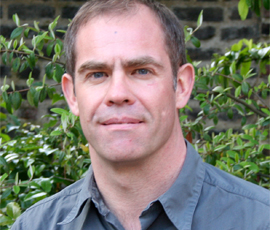 Professor Ogborn’s election to the British Academy is in recognition of his research on seventeenth and eighteenth-century Britain and its relationship to the wider world.

He comments: "It is a very great honour to be elected to the Fellowship of the British Academy, and to join the list of distinguished names from Queen Mary who are already Fellows. I very much look forward to participating in the work of the Academy to promote, support and encourage the excellent research done in British universities."

Professor Ogborn’s books include Spaces of Modernity: London's Geographies, 1680-1780 (New York, 1998), Indian Ink: Script and Print in the Making of the English East India Company (Chicago, 2007) and Global Lives: Britain and the World, 1550-1800 (Cambridge, 2008), which explores Britain’s engagement with the world, from Elizabethan exploration to the scientific voyages to the islands of the Pacific by James Cook in the late eighteenth century.

His current work – titled The Freedom of Speech – explores the histories and geographies of oral communication in Caribbean slave societies. It argues that as well as understanding the forms of talk of the colonised and enslaved, we need to understand empires as oral cultures too. This has been investigated through examining oath-taking and evidence-giving in the law courts of Barbados and Jamaica, a broken promise that led to the deportation of the Jamaican Maroons in the 1790s, and the different ways in which knowledge about plants was communicated in eighteenth-century Jamaica.

The British Academy nominates highly distinguished academics each year at its Annual General Meeting, in recognition of outstanding research. The British Academy Fellowship represents the full range of the Academy's subject areas from early literature to law.

Sir Adam Roberts, President of the Academy said: “The new Fellows, who come from 23 institutions across the UK, have outstanding expertise across the board – from social policy and government, to sign language and music. Our Fellows play a vital role in sustaining the Academy’s activities - from identifying excellence to be supported by research awards, to contributing to policy reports and speaking at the Academy’s public events.

“Their presence in the Academy will help it to sustain its support for research across the humanities and social sciences, and to inspire public interest in these disciplines.”