On Tuesday 16 October, the Leo Baeck Institute (LBI) at Queen Mary, University of London will be celebrating the launch of an online research archive devoted to 500 years of German-speaking Jewish history. 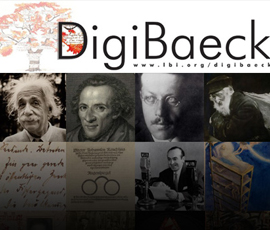 The Institute’s partner, the Leo Baeck Institute in New York, has assembled some 3.5 million pages of material, from rare books, letters, memoirs, art and photography spanning five centuries of Jewish life in Central Europe. The entire archive has been digitised to form DigiBaeck, and will be freely accessible to the public online.

An event celebrating the launch of the archive will be held in New York and screened live at the Leo Baeck Institute in Queen Mary’s Arts 2 Building at the Mile End campus from 2pm. It will also be streamed online here, accessible to everyone.

Dr Daniel Wildmann, Senior Lecturer in History and deputy director at the Leo Baeck Institute London, comments: “Putting this archive online will tremendously facilitate research for both historians and interested members of the public. It will make Jewish history accessible all over the world.”

Among DigiBaeck’s vast collection of material are the personal papers and photographs of luminaries such as Albert Einstein and the philosopher Moses Mendelssohn, and letters, diaries, recipes, and other documents chronicling the lives of German-speaking Jews. The collection encompasses documents in German and over a dozen other languages, with many pieces in the collection including English translations.

“German-speaking Jews accomplished breakthroughs in so many fields – from science to medicine and art and architecture – so it is appropriate that this archive is the first to present itself in its entirety on the Internet,” said Carol Kahn Strauss, Executive Director of the Leo Baeck Institute in New York.

About the Leo Baeck Institute

Named after Leo Baeck, the last public representative of the Jewish community in Nazi Germany, the Institute was founded in 1955 by the Council of Jews from Germany. With centres in London, New York and Jerusalem, it is the mission of the Institute to preserve for posterity the history and culture of German-speaking Jewry.

The London LBI organises a broad range of events such as lecture programmes and international conferences, both in the UK and abroad and also funds fellowships. The Institute has recently established two research professorships to investigate the role of German-speaking Jews in 19th and 20th century academia.

More information about the LBI London can be found here.