Former Downing Street communications chief, Alastair Campbell is launching of the fourth and final volume of his diaries on 20 June at Queen Mary, University of London. 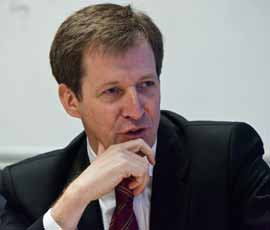 He will be in conversation with John Rentoul, Independent on Sunday columnist, Tony Blair’s biographer and QM Visiting Fellow at an event hosted by the College’s Mile End Group.

This volume, ‘The Burden of Power: Countdown to Iraq’, covers the most turbulent period of Campbell’s time as then-Prime Minister Tony Blair’s head of communications, 2001-03. It begins on September 11, 2001, a day which immediately wrote itself into the history books, and it ends on the day Campbell leaves Downing Street.

This will be the second time Campbell, New Labour’s one-time director of communications and strategy, has visited QM. In 2009, he spoke to undergraduates at the College as part of ‘The Blair Government’ course, teaching the recent history of Tony Blair’s 10 years in office. The course has since developed into the New Labour in Government module, taking in Gordon Brown’s time as Prime Minister.

Dr Jon Davis who leads the course and is Executive Director of the Mile End Group describes Campbell as one of the foremost political figures of recent times, “being both endlessly fascinating and divisively controversial in equal measure”.

“That he has chosen to launch his final Diaries, covering the road to Baghdad which proved the turning point for the Blair Government, at the Mile End Group is another demonstration that the MEG is becoming one of THE forums for political and governmental history in the UK,” Dr Davis adds.

Alastair Campbell became Tony Blair’s chief press secretary and official spokesperson in 1994. A former political reporter, and often described as one of the most influential political communicators of modern times, Alastair Campbell played a key role helping to create New Labour and return the Party to power in 1997.

After helping the Labour leader win a second landslide election victory, he became director of communications and strategy at Number 10 until he resigned in September 2003. He came back to support the 2005 and 2010 election campaigns and was in No 10 on the day that Gordon Brown, and New Labour, finally departed.

In 2007, Alastair Campbell published his first book entitled: The Blair Years: Extracts from the Alastair Campbell Diaries, a revealing account of life at the heart of New Labour. The first volume of the quartet of diaries soon followed.

Although The Burden of Power is the final volume in this series, Campbell continued to keep a diary beyond 2003, the entries from which, he has previously indicated, may be published at some point in the future.

Set up nearly 10 years ago as an informal discussion group for postgraduates of contemporary political history at Queen Mary, the Mile End Group has evolved into a seminar series attracting top speakers with inside knowledge of government and Whitehall.