A historian at Queen Mary, University of London is to chart 800 years of masculinity in a new landmark series for BBC Radio Four. 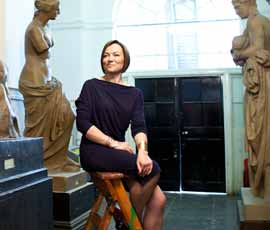 Amanda Vickery, Professor of Early Modern History at Queen Mary, chronicles the story through six archetypes of ideal men, from the Middle Ages to the 1950s.

In the six-part series, Professor Vickery explores: the Medieval Knight; the 17th-century Gentleman; The 18th-century Lover; the Sailor; the Explorer; and 1950s professional man, the Suit – role models which still have an echo today.  Episode one of Amanda Vickery on...Men airs on Monday 6 August, 9am-9.30am on R4.

Speaking of her subject for the series, Professor Vickery notes: "Men are made not born.  Masculinity is as much a training and performance as femininity – a conclusion impressed on me by investigating 800 years of men for Radio 4.  It’s hard work being a bloke!"

Programme one, the Knight, begins on location in Pembroke Castle with crusader historian Dr Tom Asbridge, also from QM’s School of History. He reveals how the man who built it, William Marshall, came to be seen as the perfect knight, an example men tried to emulate for centuries.

Knights were the professional footballers of their day – they could rise socially and accumulate princely wealth through lithe horsemanship and prowess in the joust. The programme brings to light manuscript evidence of the struggle ordinary gentleman faced to live up to this exacting ideal.

In the second programme, Professor Vickery, who lectures on British social, political and cultural history, explores the Gentleman, an ideal of refinement and culture which has its roots in Renaissance Italy.

By the 17th century it was no longer enough for a man to be a warrior knight; he had to be cultured and graceful as well. Of course the mask of the gentleman often slipped and Professor Vickery finds entertaining evidence of young men behaving very badly indeed.

The Sailor is subject of episode four. From the defeat of the Armada to the Battle of Trafalgar the sailor was the most virile poster boy of British manhood. National wealth rested on maritime trade and it was the sailor who ensured that Britain ruled the waves.

Professor Vickery goes to Horatio Nelson’s flagship HMS Victory, to find out how Nelson became a symbol of the nation.

The rugged explorers of the 19th and early 20th century still fascinate us, as captured in episode five. In a recreation of Captain Scott’s Antarctic hut, in the Natural History Museum, Professor Vickery talks about the ideal of masculine heroism which Scott personified, and about the male camaraderie of his team. The programme touches on Scott as role model for generations of men, and explores men`s desire to escape the home and domestic responsibility.

Professor Vickery ends her series in the 1950s, with a post-war generation of men trying to make it into positions of power in the British establishment.

She visits to the House of Lords to meet Peter Hennessy, also a historian at QM, who talks about life as a grammar school boy learning to be a “social amphibian”, imitating other more powerful and privileged men.

The programme also recorded in the Foreign Office with QM historian James Ellison, who has studied the application files of young men trying to get jobs there. Dr Ellison finds funny and telling extracts from those applications.

The programme looks at what it was like to try to get on as a gay man in the era, and how wartime heroism helped create an ideal of masculinity even after the war was over.

Professor Vickery has written and presented many history documentaries for television and radio. Her TV series At Home with the Georgians aired on BBC2 in December 2010 and subsequently nominated for an RTS award. The Many Lovers of Miss Jane Austen was broadcast December 2011 as part of BBC2’s prime-time Christmas scheduling.

The History of Masculinity is the latest of several radio series Professor Vickery has made in collaboration with producer Elizabeth Burke, the most recent of which was the acclaimed Voices from the Old Bailey.