For those too old to trick or treat this Halloween, Queen Mary, University of London will be kick-starting National Pathology Year’s Blood Month with a double-bill of vampire-themed lectures. 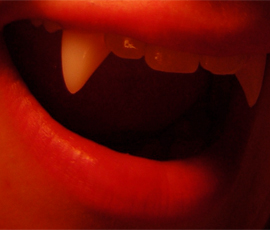 The evening seminar at St Bartholomews Pathology Museum on Wednesday 31 October features guest speakers Dr Stacey Abbott, Reader in Film and Television Studies at the University of Roehampton and author of Celluloid Vampires, and Nancy Schumann, an expert in female vampires in folklore and Anglo-American literature.

Entry to the event will include wine, light refreshments and, for those who can stomach it, a specially concocted glass of ingestible blood from experimental caterers Animal Vegetable Mineral. In keeping with the night's theme, the National Blood Service - part of NHS Blood and Transplant - will also be on hand to discuss the importance of blood donation.

Dr Stacey Abbott’s lecture 'Cancer with a Purpose: Putting the Cinematic Vampire Under the Microscope' will examine the relationship that has existed between the vampire myth and science from as early as 18th Century folklore and 19th Century literature, through to contemporary cinema.

While dark and doomed romance is now the trend for the contemporary vampire, Dr Abbott will look at how the genre often expresses contemporary anxieties about developments within science and their impact on humanity, the body and society.

Queen Mary’s Nancy Schumann, author of the book Take a Bite and editor of the London Vampyre Group’s Chronicles magazine, will speak on ‘Women with Bite: The Vampire in Folklore’. With the Twilight generation eagerly flocking to the cinema to devour film after film, Schumann asks whether we really understand how and why these mythical creatures have come to dominate popular culture.

She will trace the vampire legend, focusing on the vampiress, from the Far East to Western society as the myth develops from hideous, marginalised monsters to the beautiful blood-sucking femme fatale.

Over the past year, the museum at Queen Mary’s West Smithfield campus – which recently unveiled its restored wooden flooring – has become a popular venue for unique evening seminars, workshops and art exhibitions. All proceeds from the Halloween event will go toward the museum conservation fund.

Opened in 1879 by Edward VII the site contains some 5,000 preserved medical specimens, with a focus on cardiovascular, reproduction, cancer and forensic medicine. Specimens on display include the skull of John Bellingham – the assassin of the Prime Minister, Spencer Percival – who was 'hanged and anatomised' for his crime in 1812.