The Eurozone is on the cusp of further financial turmoil, warned Former Chancellor Alistair Darling when he lectured students at Queen Mary, University of London last week. 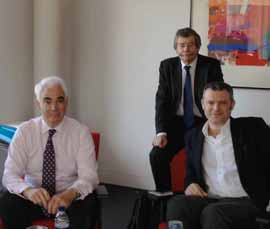 Mr Darling was speaking at the MA course, 'New Labour in Government', students of which examine the ultra-contemporary history of New Labour; from the 1997 General Election win to the party’s defeat at the polls in 2010.

The Labour MP told the postgraduate class that the situation in Spain - where stringent public sector cuts provoked a general strike and mass public discord - should stand as a warning to the rest of the EU.

"Part of the problem with Europe," he noted, "is that a lot of [nations] took the view that that this crisis is now behind us, therefore this is a time to visit austerity, whereas the countries who are going to be most hit by austerity are not out of the crisis at all."

"I think we're in a lull in Europe at the moment. It's rather like going through cyclones. You get in the middle and you think, great. And then you forget the other side of it because I think Spain is now in quite serious trouble and Italy is by no means out of the wood."

During the seminar, Darling pressed the British government “to support the economy through stimulus” until there were clear signs of recovery. “You shouldn't be carrying very high borrowing and very high levels of debt – there's nothing good in that in the long term."

Darling faced a backlash from within the Cabinet when he warned in an interview in August 2008 that Britain was approaching its worst economic situation in more than 60 years. Shortly afterwards was proved right by the collapse of Lehman Brothers Bank, and within months the country went into recession, from which it is still struggling to recover.

“Alistair Darling's comments - and the impact they have had on the news agenda - demonstrate once again how relevant the study of ultra-contemporary history is. It is thrilling for students to be in class one day and see what was being said in the next day's newspapers,” said Dr Jon Davis, who runs the course alongside John Rentoul, political commentator for the Independent on Sunday. William Keegan – Senior Economic Commentator for the Observer, also attended the class.

Alistair Darling is Labour MP for Edinburgh South West. He served as the Chancellor of the Exchequer from 2007 to 2010. Darling was one of only three people to have served in the Cabinet continuously during New Labour's 13 years in power.