A common chemotherapy drug has been successfully delivered to cancer cells inside tiny microparticles using a method inspired by our knowledge of how the human immune system works. The drug, delivered in this way, reduced ovarian cancer tumours in an animal model by 65 times more than using the standard method. This approach is now being developed for clinical use. 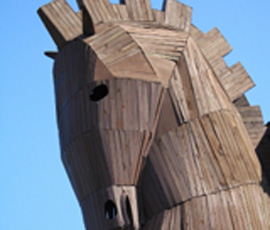 The research was funded by, among others, the Biotechnology and Biological Sciences Research Council (BBSRC) and carried out at Queen Mary, University of London. The study will be published next week in the journal, Biomaterials.

Dr Davidson Ateh, who worked on the research at Queen Mary, University of London and set up the start-up company, BioMoti, that will develop the technology for clinical use said: “It’s like we’ve made a re-enactment of the battle of Troy but on the tiniest scale. In Troy, the Greeks fooled the Trojans into accepting a hollow horse full of soldiers – we’ve managed to trick cancer cells into accepting drug-filled microparticles.”

Dr Ateh and colleagues found that by coating tiny microparticles of around a hundredth the diameter of a human hair with a special protein called CD95, they could in fact trigger cancer cells into ingesting these particles. Not only that, but the particles could deliver a dose of a common chemotherapy drug called paclitaxel.

The key to their success is that CD95 attaches to another protein called CD95L, which is found much more commonly on the surface of cancer cells than it is on normal healthy cells. Once attached, the cancer cells ingest CD95 and the microparticle with it.

Inside the cell, the microparticle can unload its chemotherapy cargo, which kills the cell to reduce the size of the tumour.

Dr Ateh added: “Other researchers had already noticed that cancer cells may use this CD95-CD95L arrangement to avoid being destroyed by the immune system, which is why they display more CD95L than normal cells. We’ve managed to turn this to our advantage and hijack the cancer cell’s own trick-of-the-trade to get our ‘Trojan Horse’ through the gate.”

Co-author and Professor of Gynaecological Oncology at Queen Mary, University of London, Iain McNeish commented: “Chemotherapy is still the main way that we treat ovarian cancer, which can be particularly aggressive and difficult to treat. Anything we can do to concentrate the treatment in tumour cells and at the same time protect healthy cells is a good thing. This is an elegant method and if it works in a clinical setting as well as we hope it will patients could experience a better treatment with fewer side effects.”

Principal investigator and Professor of Pathology at Queen Mary, University of London, Joanne Martin added: “There are lots of drugs that we would like to deliver into cells – not just chemotherapies – and this could work for those too. For example, there are new classes of drugs to treat tumours, such as biological therapies. If we could load biological therapies into the same CD95-coated particles, then there’s no reason why they couldn’t also be delivered in this way.”

The researchers are now advancing these studies and BioMoti is seeking to attract larger and established pharmaceutical companies to partner the technology, dubbed OncoJanTM in reference to the earlier Trojan horse, for the clinical development of new treatments in specific types of cancer.

Professor Douglas Kell, Chief Executive, BBSRC said: “BBSRC funds a great deal of work that is aimed at improving our fundamental understanding of biological processes. When there are opportunities to use this understanding to the benefit of people, it is vitally important to seize and make the most of them. This is a good example where research into the human immune system has led to a new technology that has the potential to underpin health and wellbeing into later life.”