Adrian Hobbs joins Barts and The London School of Medicine and Dentistry at Queen Mary, University of London from UCL – he has been appointed to the William Harvey Heart Centre for cardiovascular disease prevention. 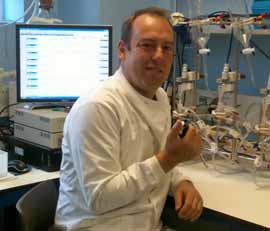 The Centre - a 3172m2 building for integrated therapeutics research based at Charterhouse Square - combines new basic science strengths in the study of how genes raise blood pressure, and how disorders of heart rhythm are triggered, alongside high-calibre stem cell biology and biomarkers research. Adrian’s group focuses on the guanylate cyclase family of enzymes and the interaction between NO and natriuretic peptides in the cardiovascular system.

Adrian completed his BSc in Pharmacology - obtaining First Class Honours - at King's College London in 1989. He investigated the role of nitric oxide (NO) as a neurotransmitter in nonadrenergic, non-cholinergic (NANC) nerves and took up a post-doctoral position in the laboratory of Nobel Laureate, Professor L.J. Ignarro, at UCLA under the auspices of Fulbright-Hays and American Heart Association Fellowships. Subsequently, Adrian has successfully won support from the Wellcome Trust, BHF and BBSRC, as well as securing his own personal funding in the form of Wellcome Trust Career Development and Senior Fellowships.

Adrian has joined the William Harvey Heart Centre as Professor of Cardiovascular Pharmacology to harness the translational potential of the environment, exploiting the exceptional links between pre-clinical and clinical research, with the goal of developing and evaluating novel treatments for cardiovascular disease stemming from his academic research findings; this will centre on ischaemic disorders (myocardial infarction, stroke) and pulmonary hypertension/heart failure.