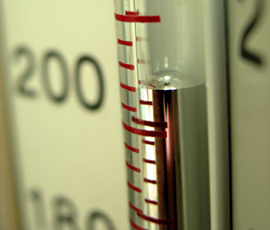 Developed in conjunction with the British Hypertension Society (BHS) - whose President, Professor Mark Caulfield, Director of the William Harvey Research Institute is an expert member of the Guideline Development Group - it makes a number of new recommendations that are set to significantly improve the way health professionals diagnose and treat high blood pressure in the NHS in England and Wales.

The recommendation draws on substantial new evidence suggesting that ABPM is more accurate than both clinic and home monitoring in defining the presence of hypertension, and that implementation of a diagnostic strategy for hypertension using ambulatory monitoring following an initial raised clinic reading would reduce misdiagnosis and be cost saving for the NHS.

High blood pressure is one of the most important preventable causes of premature ill health and death in the UK. It is a major risk factor for stroke, heart attack, heart failure, chronic kidney disease and cognitive decline.

Primary hypertension is diagnosed when there is no simple identifiable cause of the raised blood pressure: the hypertension may be related, in part, to obesity, dietary factors such as salt intake, physical inactivity or genetic inheritance.

Mark Caulfield, Professor of Clinical Pharmacology at Queen Mary, University of London, President of the British Hypertension Society and Guideline Development Group member said: “The British Hypertension Society is delighted to have partnered NICE in this new guideline which represents a major advance in the diagnosis and treatment of people with high blood pressure. For the first time, using this NICE guideline in the treatment of high blood pressure is cheaper than doing nothing. I am sure all those with an interest in hypertension will welcome these recommendations.”

The guidelines are underpinned by a paper published today in The Lancet describing evidence of the cost-effectiveness of ambulatory blood pressure monitoring over clinical monitoring which is co-authored by Professor Caulfield.