Leading international scientists – among them Fran Balkwill, Professor of Cancer Biology at Barts Cancer Institute, Queen Mary, University of London - are behind a new nine-point action plan for ovarian cancer research entitled ‘Rethinking Ovarian Cancer’ published today in Nature Reviews Cancer.  The authors, together with Ovarian Cancer Action - the UK’s leading ovarian cancer action charity - this morning urged colleagues, research funders, charities, industry and patients to back the strategy in beating what remains one of the most deadly cancers for women in the UK and across the world. 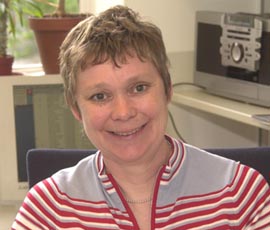 The plan is the outcome of a global summit of scientists held earlier this year in the United States and organised by Ovarian Cancer Action.  Professor Fran Balkwill, Chair of the 12th International Helene Harris Memorial Trust Forum in January, described it as one of the most significant meetings in the field for over a decade.

She said: "This action plan challenges established thinking about ovarian cancer including the way it is typically defined and the likely value of widespread screening based on current knowledge.  But what is truly exciting is the consensus that has emerged from the meeting in terms of the direction we must follow to accelerate the science and, most importantly, improve the prospects of survival for women with ovarian cancer across the world. The emphasis on clinical trials work and on data sharing is significant and exciting."

Allyson Kaye, Chair of Ovarian Cancer Action and an attendee at the meeting, added: "We must all back this plan.   If we can increase funding for research and get the necessary spirit of collaboration going we could be entering the most exciting and promising decade yet for ovarian cancer research and make a major leap forward in transforming it from one of the most deadly to one of the most survivable cancers.  We have undoubtedly seen progress in recent years but it is not nearly enough."

The action plan’s senior authors, Professor David Bowtell and Professor Frances Balkwill released the following joint statement to coincide with its publication: "The HHMT’s strong belief in getting the best people together, sharing ideas and making progress as rapidly as possible set the tone for the meeting. We can’t recall another meeting where there was such a collegiate atmosphere and a desire to ask the hard questions about what would make a difference. The recommendations quite simply would not have happened without the 12th International HHMT Forum, organised by Ovarian Cancer Action.”

Simon Denegri, Chief Executive of Ovarian Cancer Action said: "From a patient perspective it is excellent to see this review place such high importance on looking at quality of life and symptom benefit issues. We really are entering a new phase here where dialogue with patients and their loved-ones is going to be increasingly important if they are to understand the pros and cons of particular treatments but also to enlist their involvement and participation whether it be in terms of testing new treatments or sharing tissue and data which will help us learn more about the mechanisms of the disease."