A genetic pattern could predict how aggressive prostate cancer is before treatment, and whether the disease will come back in men who have already been treated, according to research published in the Lancet Oncology. 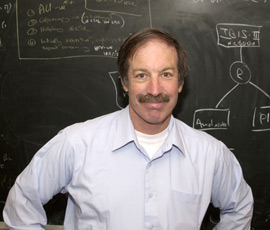 Researchers funded by Cancer Research UK and based at Queen Mary, University of London, found that men with the highest levels of ‘cell cycle progression’ (CCP) genes – ones that encourage cells to grow – were three times more likely than those with the lowest levels to have a fatal form of prostate cancer.

And for patients who have had surgery to remove their prostate, those with the highest CCP levels were 70 per cent more likely to have a recurrence of the disease.

Knowing how to distinguish the aggressive tumours that need treatment from the slow-growing ones that could be monitored, sparing men from unnecessary treatment and side effects like impotence and incontinence, is the most important riddle prostate cancer scientists have to solve.

The researchers believe that if these results are confirmed in large clinical trials, a test for CCP gene expression – alongside existing ones like the PSA test – could be used routinely in the clinic to overcome this problem.

Lead author and Cancer Research UK epidemiologist, Professor Jack Cuzick, based at Queen Mary, University of London, said: “Our findings have great potential. CCP genes are expressed at higher levels in actively growing cells, so we could be indirectly measuring the growth rate and inherent aggressiveness of the tumour through our test.

“We already know that CCP levels can predict survival for breast and, more recently, brain and lung cancers. It’s really encouraging that this could also be applied to prostate cancer, where we desperately need a way to predict how aggressive the disease will be.”

The study looked at 703 men with prostate cancer – 366 men in America who had undergone surgery to remove the prostate, and 337 men in the UK with cancer that was confined to the prostate and were judged to not need immediate treatment. The untreated group were given the ‘watch and wait’ option, which allows doctors to try to avoid treating men whose prostate cancer will not cause them any significant problems.

Tissue samples from the prostate were either taken during surgery or during the biopsy that was used to diagnose the disease.

The sample was then tested for levels of 31 different genes involved in CCP. The researchers were then able to show that a predefined combination of these gene levels can identify men at high or low risk of the disease spreading beyond the prostate and those most likely to die.

Dr Lesley Walker, director of cancer information at Cancer Research UK, said: “This is important research that could one day help solve one of the biggest problems in prostate cancer treatment. For some men, detecting prostate cancer early could be lifesaving. For others, it could mean unnecessary treatment and serious side effects.

“This test isn’t yet available for routine use, but we’ll look forward to seeing the results of large clinical trials that will tell us whether it’ll be useful for all men with prostate cancer.”